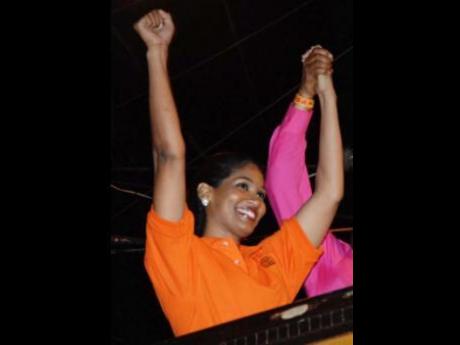 Notwithstanding the controversy and sometimes fiery exchanges that ensued in the lead up to today, Lisa Hanna this afternoon secured a convincing win to remain the People's National Party's (PNP) candidate to represent the South East St Ann constituency.

Hanna was expected to face Lydia Richards, a councillor for the Bensonton Division in the constituency represented by Hanna. However, Richards pulled out at the last minute alleging irregularities with the delegates' list.

Some 484 people voted out of the 1,056 who were eligible. In the end, Hanna got 468 votes while Richards garnered 10, albeit she had pulled out.

Hanna, the youth and culture minister, described the process ending with today's result as a "great experience".

She told The Gleaner that the experience has built her self-confidence.

The PNP's leadership will ultimately determine whether Hanna goes forward as the party's candidate.

Richards had accused Hanna of not being a good representative and months ago declared her intentions to challenge the incumbent MP.