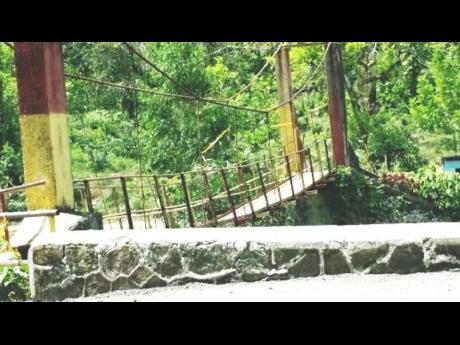 Gareth Davis Snr
The disintegrating bridge which residents of Station in the Buff Bay Valley in Portland use daily.

The Portland Parish Council is coming in for strong criticisms over its failure to construct a temporary bridge to replace one which is disintegrating in the Buff Bay Valley, despite money being approved for the project some time ago.

"This is a total disgrace. Money totalling approximately $500,000 was approved to carry out the construction of a temporary bridge to replace the old structure, which is falling apart," declared a livid Daryl Vaz, the member of parliament (MP) for West Portland.

"Additionally, approximately $1.2 million was approved to construct a new bridge, and after almost one year, no work has been done. What has happened now is that the bridge, which has four cables on each side, has rotted and is breaking apart," added Vaz.

According to Vaz, the failure of the council to treat the matter as a real emergency has resulted in a bad situation getting worse, as some 400 residents of Station in the Balcarres division are being put at risk as the cables are now breaking after decades of use.

"The hardest thing to come by for the parish council or any other government entity is funding. It was only last Thursday (September 24) that the tender process was concluded after almost a year.

The bridge is the only access route from the main road into the community of Station and was erected decades ago.

However, councillor for the Balcarres division, Hopeton Malloy, said the delay in setting up a temporary replacement is to be blamed on the procurement process and not the council.

According to Malloy, the procurement process took some time to be completed, as the first set of bidders did not qualify in keeping with the council's expectations as it relates to costing.

"Yes, the people are affected," said Malloy. "However, after speaking to them, they have agreed to exercise patience and tolerance. As a matter of fact, the tender process is completed, and work to erect the temporary bridge will commence tomorrow (Monday)," added Malloy.