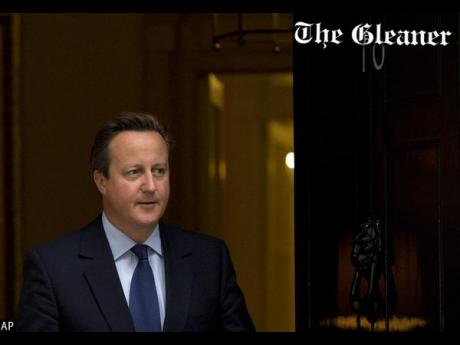 British Prime Minister, David Cameron. He is expected to address the Jamaican Parliament on Wednesday morning at 8.25.

The chairman of CARICOM's Reparation Commission, Sir Hilary Beckles, has penned an open letter to British Prime Minister David Cameron pleading for him to respond to the calls for compensation by the British for the period of slavery in the region.

According to Sir Hillary, otherwise, there could be the greatest political movement of this era.

"It is not an issue that can be further ignored, remain under the rug, or placed on back burners, as your minister who recently visited us so aptly described your agenda for Jamaica and the Caribbean," Beckles wrote ahead of Cameron's arrival in Jamaica this week.

The British Prime Minister is expected to address the Jamaican Parliament on Wednesday morning at 8.25.

According to Beckles, the Jamaican economy, more than any other, at a critical moment in Britain's economic development, fuelled its sustainable growth and in so doing became great while Jamaica has remained the poorer.

"Jamaica now calls upon Britain to reciprocate, not in the context of crime and compulsion, but in friendly, mutually respected dialogue. It is an offer of opportunity written not in the blood of our enslaved ancestors but in the imagination of their offspring and progeny who have survived the holocaust and are looking to the future for salvation," Beckles said. I join with the resolute and resilient people of Jamaica and their government in extending to you a warm and glorious welcome to our homeland. We recognise you, Prime Minister, given your family's long and significant relationship to our country, as an internal stakeholder with historically assigned credentials.  To us, therefore, you are more than a Prime Minister. You are a grandson of the Jamaican soil who has been privileged and enriched by your forebears' sins of the enslavement of our ancestors.

As we prepare for you a red carpet befitting your formal status we invite you to cast your eyes upon the colours of our national flag that symbolise the history we share. You are, Sir, a prized product of this land and the bonanza benefits reaped by your family and inherited by you continue to bind us together like birds of a feather.

Be assured, Prime Minister, that you will find no more generous people on our planet Earth than those who will greet you with golden hearts and civilised consciousness. I urge that you embrace the sincerity of our salutations. It is born and bred in the cauldron of our enslavement by your family and society. Consider it a golden gift of friendship and not simply the empty expression of protocols relevant to the events you will attend. It is furthermore, an overture to an expectation of a dialogue of reparatory justice that can redefine for us a new intimacy for this long 21st century on which we are embarked.

Your advisers would have informed you that beyond the boundary of the affairs of State, civil society welcomes you without reservation, though with a qualification that bears the burden of our tortured past within the historically textured present. I speak of outstanding and unresolved matters that are relevant to our sense of mutual respect as equal nations dedicated to the cause of furthering humanity's finest imagined destiny.

I speak, Sir, of the legacies of slavery that continue to derail, undermine and haunt our best efforts at sustainable economic development and the psychological and cultural rehabilitation of our people from the ravishes of the crimes against humanity committed by your British State and its citizens in the form of chattel slavery and native genocide.

In this regard I urge you to be aware that the issue of reparatory justice for these crimes is now before our respective nations, and the wider world. It is not an issue that can be further ignored, remain under the rug, or placed on back burners, as your minister who recently visited us so aptly described your agenda for Jamaica and the Caribbean. It will generate the greatest global political movement of our time unless respected and resolved by you, the leader of the State that extracted more wealth from our enslavement than any other.

The Jamaican economy, more than any other, at a critical moment in your nation's economic development, fuelled its sustainable growth. Britain as a result became great and Jamaica has remained the poorer. Jamaica now calls upon Britain to reciprocate, not in the context of crime and compulsion, but in friendly, mutually respected dialogue. It is an offer of opportunity written not in the blood of our enslaved ancestors but in the imagination of their offspring and progeny who have survived the holocaust and are looking to the future for salvation.

As a man, a humane man, with responsibility for the humanity of your nation we call upon you to rise to this moment as you realise and internalise that without the wealth made by your enslaving ancestors, right here in our Jamaica, we would not be enchained together, today, called upon to treat with this shared past.

Successive governments in this land, a place still groaning under the weight of this injustice,  have done well during the fifty three years of sovereignty, but the burden of the inherited mess from slavery and colonialism has overwhelmed many of our best efforts. You owe it to us as you return here to communicate a commitment to reparatory justice that will enable your nation to play its part in cleaning up this monumental mess of Empire. We ask not for handouts or any such acts of indecent submission. We merely ask that you acknowledge responsibility for your share of this situation and move to contribute in a joint programme of rehabilitation and renewal. The continuing suffering of our people, Sir, is as much your nation's duty to alleviate as it is ours to resolve in steadfast acts of self-responsibility.

In the four corners of Kingston there are already whispers that your strategy will be to seek a way to weaken Jamaica's commitment to Caribbean reparations in a singular act of gift granting designed to divide and rule and to subvert the regional discourse and movement.  You Sir, are a Briton, not a Greek, and we have no reason therefore to fear what you bear. But we do ask that you recall that the Caribbean region was once your nation's unified field for taxation, theatre for warfare, and space for the implementation of trade law and policy. Seeing the region as one is therefore in your diplomatic DNA; and this we urge that you remember.

Finally Sir, I write from the perspective of an academic bred in Britain and reared in the University of the West Indies, an institution your nation planted in Kingston in 1948 with a small but significant grant. It would honour us to show you what we the people have reaped from this single seed. We have created a flourishing federal farm that now cultivates the minds of millions, a symbol of our collective determination to take seriously our self-responsibility and to place our dignity as an emerging nation before any other consideration. From this singular seed we have grown one of the finest universities in the world crafted by our hands and inspired by our dreams.

This story, Sir, can guide your reflection as to who we are and what we expect of you.  We urge you then, in this light, to indicate your nation's willingness to work towards a reparatory justice programme for the Caribbean, with a view to allowing us to come together in order to come to closure, put this terrible past behind us, and to leave it to us to continue the making of our future.