Bruce Scott - A Christian who is an Accountant 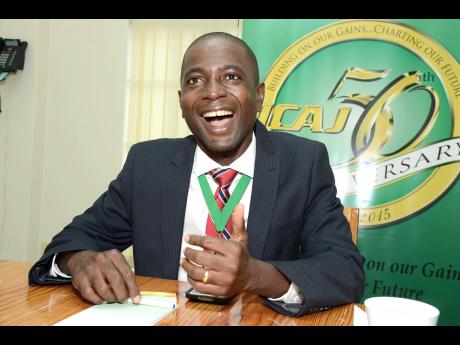 Rudolph Brown
Bruce Scott..."My Christian world view is what makes me attractive to the ICAJ."

Say the term 'chartered accountant' and visions of old, bespectacled people in sharp suits crunching numbers might come to mind.

So 43-year-old Bruce Scott might break the stereotype. Scott, president of the Institute of Chartered Accountants of Jamaica (ICAJ) since July 30, became a chartered accountant at age 21. He says this was his dream, except for a brief phase in third form at Jamaica College.

"I liked chemistry, but I quickly realised that in a primarily agrarian economy, it wasn't going to work," he said. "Maybe I didn't love chemistry that much. And then I got introduced to accounts in third form ... and I decided I was going to be a chartered accountant."

Scott proudly states he is from Southside, a sometimes violent section of the Corporate Area. But his genesis would not hinder his journey. After A levels, he didn't have the funding to attend university, so he tried matriculating straight into the Association of Chartered Certified Accountants (ACCA) professional exams while working at PricewaterhouseCoopers (PwC) as a teenager.

"PwC, being an accounting firm with a very friendly environment, was very attractive to me," he said. "I was working and studying, which was a welcome challenge because I saw where they would give me support - like study leave." Scott was determined to achieve his ACCA status in the same three years a first degree would take.

"That is part of the reason I might look young, because I've been on a kind of fast track for a long time. Praise the Lord," he laughed. But that utterance is not flippant in any way. Scott is a devout Christian, whose faith plays a big part in his work.

"A lot of the stuff I have to deal with daily involves moral judgement," he said. "But there is a sense of purpose. I genuinely believe that the profession that I'm in is a vehicle for me to spread the good news of the love of God." So he has an awareness that he's not just an accountant.

"I'm a Christian, who happens to be an accountant," he said. "But my ultimate message is to be an example of what it means to be a Christian and how this can help you to be a better husband, better friend and boss."

"My Christian world view is what makes me attractive to the ICAJ," he said. "I give all credit to God. But faith has legs. So there is a responsibility for me as a human being; I cooperate with God wherever I see Him working."

Scott became a member of the ICAJ in 1994 and has held various positions on the executive. He said he's enjoying every minute of his presidency and never misses an opportunity to speak about the ICAJ and has a strong grip on what the focus must be.

"So the enjoyment is really in being given the opportunity to influence what we all believe - that the institute is the best professional association in Jamaica," he said. As president (a term is two years) he wants to improve the engagement with the membership.

"We need to do a better job of telling our existing members how we're serving them, and use different channels to engage," he said. "The second part of engagement is to improve some of the actual things that we do." He noted that one category of the organisation, accountants in business (like chief financial officers), now have a designated committee, the Professional Accountants in Business (PAIB) to see to their needs.

"One of the weaknesses that we have is that we don't engage on a continuous basis face-to-face," he said. So a huge part of the mandate for the PAIB will be the vehicle that we use to pull members to the institute." Scott also pledged to improve engagement with small and medium-size practitioners and make the ICAJ more visible to the wider Jamaica.

From October 30-31, the ICAJ will host its 50th anniversary business conference at The Jamaica Pegasus hotel under the theme 'Anticipating Change ... Adding Value'.