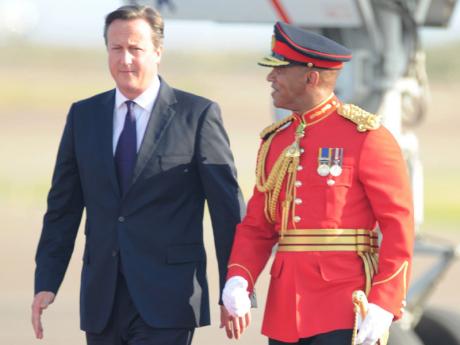 Cameron was met by the Chief of Defence Staff Major General Antony Anderson as he descended the plane.

Simpson Miller was accompanied to the aircraft that brought Cameron by Britain's High Commissioner to Jamaica david Fitton.

Cameron's arrival was heralded by a 21-gun salute and his inspection of the Jamaica Defense Force (JDF) Guard of Honour.

Simpson Miller formally introduced Cameron to Opposition Leader Andrew Holness, Speaker of the House of Representatives, Michael Peart, President of the Senate, Floyd Morris and members of the Cabinet and the government.

Simpson Miller and Cameron as well as their delegations, are holding talks at Jamaica House this afternoon.