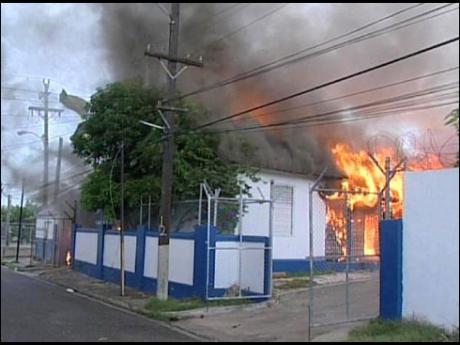 File
In this May 2010 photo the Hannah Town Police Station was engulfed in flames after it was firebombed.

Three men accused of firebombing the Hannah Town police station in Kingston during the May 2010 West Kingston operation have been freed of criminal charges because the prosecution witnesses have consistently failed to attend court.

Justice Brown threw out the case after prosecutors said the nine witnesses, all police personnel, again failed to show up for the trial.

Since then, there had been 25 mention dates and 26 trial dates.
Prosecutors had alleged that on May 23, 2010, a group of armed men shot up the Hannah Town Police Station then firebombed it.

The police personnel assigned to the station had to be rescued in an armoured police vehicle.

Violence broke out in sections of West Kingston in May 2010 as the security forces attempted to enter Tivoli Gardens to arrest drug lord Christopher 'Dudus' Coke.