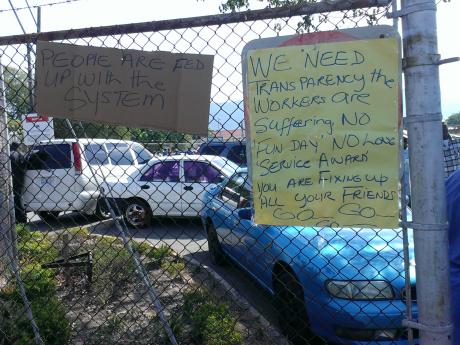 Andre Poyser Photos
One of the notices put up by workers today on the perimeter fence of National Water Commission's Marescaux Road location in Kingston. 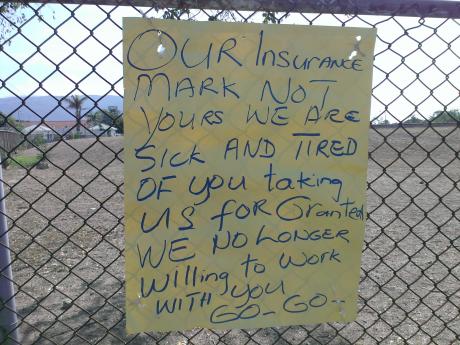 One of the notices put up by workers today on the perimeter fence of National Water Commission's Marescaux Road location in Kingston.
1
2

Employees of the National Water Commission (NWC) this morning staged a protest decrying what they call the unjust actions of management in signing off on a new health insurance plan.

They mounted placards at the Marescaux Road offices of the NWC and said they would not end their protest action until the matter is resolved.

The workers also raised concerns about a reclassification exercise that they say has been stalled for too long. They are also protesting because several levels of workers are yet to be confirmed in their positions.

President of the National Workers Union (NWU), Granville Valentine, claims that proper procedures were not followed in introducing the new health plan.

According to him, the management of the NWC went ahead and signed off on a health insurance plan without consulting the unions or the employees.

"The normal procedure is that we have a health committee and the union delegates sit on that committee.

The protest action by the workers has been reported to the Ministry of Labour and the unions are expected to meet with the NWC's management to discuss the issue.

The parties have been called to a meeting at the labour ministry at 2:30 this afternoon.