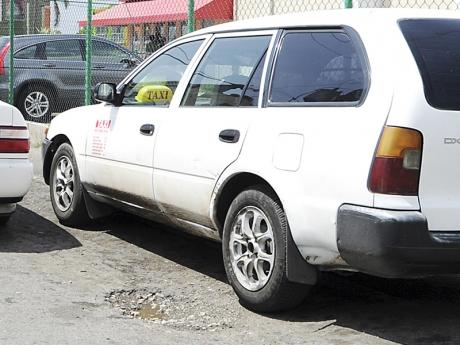 File Photo
A taxi operator told The Gleaner that after he overtook a line of vehicles at the traffic lights located on Constant Spring Road, a man jumped out of a vehicle with his gun and asked why he had overtaken the vehicles.

The Independent Commission of Investigations (INDECOM) is trying to determine whether it was a policeman who fired a bullet into a motorist’s car in St Andrew yesterday in an apparent incident of road rage.

Senior Public Relations Officer at INDECOM Kahmile Reid confirmed yesterday that a damaged warhead and a spent shell turned over by the motorist have been sent to the Government Forensic Laboratory for testing.

Reid explained that the ballistic test would determine if a member of the Jamaica Constabulary Force (JCF) fired the bullet.

The male motorist was not injured in the shooting, which occurred along Waterloo Road, in St Andrew, early yesterday morning.

The motorist, who is a taxi operator, told The Gleaner that he overtook a line of vehicles at the traffic lights located on Constant Spring Road near the tax office.

He said he noticed that the driver of another vehicle did the same and trailed him until he stopped at the gas station located on Waterloo Road, near the Mega Mart store.

He said the man then jumped out of the vehicle with his gun and asked why he had overtaken the vehicles.

The taxi operator said he tried to explain that he was transporting two women who were late for work when the man, who he claimed was dressed in blue denim pants, placed the gun against his face.

The man reported that he got into his vehicle and drove off and that’s when the other motorist fired a bullet that ripped through his door.