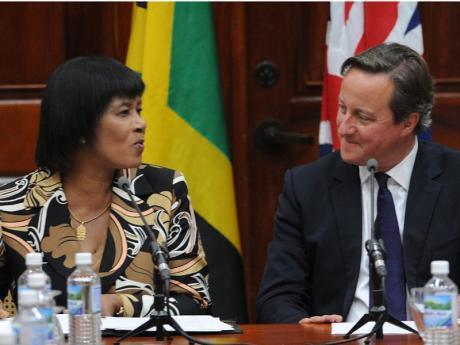 The Office of the Prime Minister (OPM) has issued a release seeking to clarify the matter of the exclusion of media interviews after bilateral talks between Prime Minister Portia Simpson Miller and the  British Prime Minister David Cameron.

The release follows comments made earlier by the British High Commissioner to Jamaica, David Fitton, that the decision not to have media interviews was not the idea of the British.

"We certainly didn’t say let’s not have any questions after the statements," Fitton told reporters Thursday.

"But the Jamaican side and our side agreed that that was the only way we could get it done quickly," he added, referring to the presentation of statements by Simpson Miller and Cameron following the bilateral talks. Two members of the local media were eventually allowed to question Cameron at the National Heroes Park Wednesday, after the Press Association of Jamaica wrote to the British High Commissioner saying it found the restriction unacceptable.

But the OPM has presented what it calls the facts concerning the reasons no questions from journalists were entertained following the Prime Ministerial press statements, and it's maintaining that it was at the request of the British.

On further review of the arrangements, representatives of the Government of the United Kingdom subsequently recommended to technocrats of the Ministry of Foreign Affairs and Foreign Trade of Jamaica, who were the lead in the planning of the programme on behalf of the Government of Jamaica, that the media activity be concluded after the Press Statements by the Prime Ministers without questions.

Following this development, Minister with Responsibility for Information, Senator the Hon. Sandrea Falconer had discussions with the British High Commissioner to Jamaica about the possibility of providing an opportunity for the Jamaican media to speak with Prime Minister Cameron during his visit.