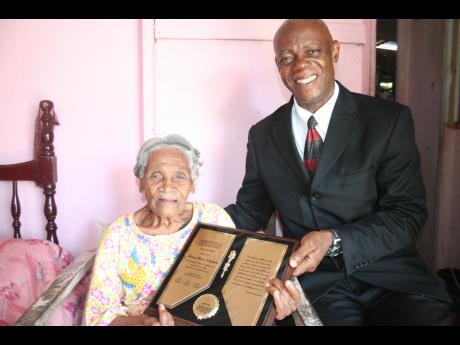 Contributed
Adassa Henry Johnson receives her Inter-American Division of Seventh-day Adventists (IAD) award in May 2013 from Pastor Arlington Woodburn, president of the Seventh-day Adventist Church North Eastern region for being the oldest baptised Adventist member in the region which covers Mexico, Central America, the Caribbean, French Antilles, Colombia and Venezuela. Woodburn collected the award on her behalf in Miami because she was unable to travel.

One-hundred-and-three-year-old Adassa Henry Johnson is among the list of special awardees to be recognised by the Jamaica Union Conference of Seventh-day Adventists during an awards ceremony, which forms part of its celebration of 125 years of Adventism in Jamaica this year.

Johnson, who resides in Oracabessa, St Mary, is the oldest baptised member of  the Seventh-day Adventist Church in Jamaica having done so 93 years ago.

She will be among a group of 125 awardees and eight special awardees who will be recognised in the categories of publishing, evangelism, education, community outreach and health (PEECH) as part of an overall 131 awards that will be handed out.

Baptised at age 10 in the Labrynth Church, Johnson was an active member who served in the departments of youth ministries as well as community service and was a member of the church choir. She was recognised in May 2013 by the Inter-American Division of Seventh-day Adventists (IAD) for being the oldest baptised Adventist in the region which covers Mexico, Central America, the Caribbean, French Antilles, Colombia and Venezuela.

“We are happy to have the opportunity to recognise Sister Johnson for her invaluable support to our Church and faithfulness to God over the past years,” said Pastor Everett Brown, president of the Seventh-day Adventist Church in Jamaica. This award is nothing compared to the reward that Her Lord and Saviour, Jesus Christ has for her when He returns.”

The Church’s celebrations begin tomorrow with a thanksgiving service in the morning followed by an award and recognition ceremony in the afternoon.

On October 25, members of all of the more than 738 Adventist congregations in Jamaica will undertake physical facelift to the 172 police stations islandwide along with counselling with JCF members where necessary.

Then, on November 22, the celebrations culminate on the NCU grounds in Mandeville grand anniversary expo, health fair, and heritage quiz final. The day’s activities will climax with a musical showcase featuring some of the best soloists, groups and choirs in the Seventh-day Adventist movement.