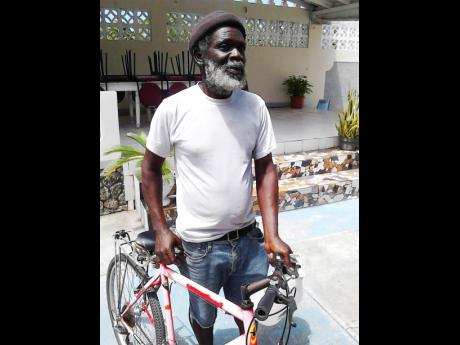 Gareth Davis Sr
Jackson notes that is while praying and meditating that the vision comes, wherein he receives insights of the varied herb-healing plants.

HUBERT JACKSON, a Rastafarian who considers himself to be highly spiritual, is boasting about his own herbal treatment, which he claims is a special gift from Haile Selassie, a former Ethiopian emperor.

The 65-year-old Portland resident is adamant that his ability to cure himself from various colds, pains, and disease is through fervent prayer and worship to his god, Selassie, who reveals to him in a vision, herbs that can heal the body from just about every kind of sickness.

“Selassie is god,” commented Jackson. “He, who was fitted with the title ‘king of kings, lord of lords, and the conquering lion of Judea’ is really Jesus Christ in the flesh. It is a process of reincarnation, and Jesus had the same title, but He was crucified by the Romans and later rose from the tomb.

Africa is for black people, and Jesus was a Jew from the bloodline of Jesse, who was a black man,” he added. Jackson explained that his Rastafarian belief does not necessarily permit him to engage in the smoking of marijuana (ganja) as part of any religious rite, but instead, he engages in prayer and worship and deep meditation by locking himself away at home.

He noted that while praying and meditating, the vision comes, wherein he receives insights into the varied herb-healing plants, which are to be proportionally administered.

He noted also that assembling with other members of the Rastafarian faith is not something that he indulges in as he believes the long hair and smoking of ganja do not qualify one to be a true Rastaman. And while admitting that the words from the Holy Bible are authentic, Jackson argues that there is, however, a disparity with the creation story involving Adam and Eve, which he himself has dismissed as a mere story and nothing else.

Continuing, Jackson said: “Nature creates itself and not a god creating a man and a woman. One does not die; only the body dies. The soul remains alive and simply manifests into a new body over time as in the case of Jesus and Selassie.

These things have been hidden from us for a long time, but slowly and surely, we are finding out the truth. Good health, extending love, and kindness are the key to a better life.”