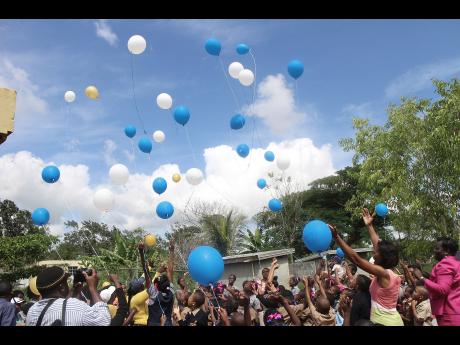 Tamara Bailey
Students and staff of Richmond Primary School release ballons in celebration of their 94 per cent literacy score.

Pride and excitement swelled the hearts of students, teachers and parents of Richmond Primary School as they took to the streets last Tuesday to celebrate one of the school's biggest achievements - a 94 per cent literacy rate.

It was no ordinary celebration, as the school family coordinated a 12-car motorcade through the adjoining communities and in the town of Mandeville. Armed with balloons of the school's colour bearing text 'Richmond Primary, 94 per cent UP UP UP', the children cheered along the way as onlookers sang their praises.

Labelled as an underdog for years, the school which was placed third to last in the parish in 2014 based on a 59 per cent literacy rate, knew there had to be an improvement and started a regimen to make it possible.

"We didn't like being at the bottom, so we set out on a very intensive programme with the children, where we grouped them according to their levels. We did not want to mix the lower school with upper school, so at grades one to three, we had the non-starters, the pre-primers and the primers in one group ... those who were at grade three and reading above that level would come over to upper school," said Principal Annie Barrett-Elliott.

Recognising, too, that student attendance was a major problem, Barrett-Elliott addressed the issue with a breakfast programme.

"We knew that once we had the students at school, we would improve the literacy rate and, of course, we thought about the breakfast programme. we didn't have any money, but our board chairman Donald Sutherland made it all possible. The students came out early and all the teachers began having early classes."

Having had 15 students sit the Grade Four Literacy Test all but one, who missed the perfect score by one point, received mastery.

First-time grade-four teacher Ashalia Williams said it took a lot of improvisation and use of material from the ministry to make it possible.

"We used CDs from the ministry and textbooks that were donated by the Richards family, who are past students of this institution. Some days after planning the lesson, you realise the students aren't grasping the concept and you have to plan on the spot and find new ways of teaching. I'm excited it all worked out," she said.

The principal is hoping that the small school with a population of 123 students will gain the confidence of community members and continue striving.