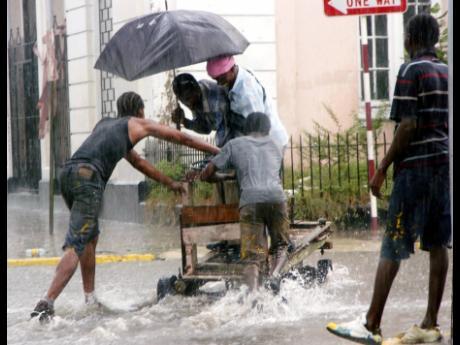 File Photo
The Meteorological Servic says a trough induced by Hurricane Joaquin is producing showers and thunderstorms across Jamaica.

The Meteorological Service has issued a Flash Flood Watch for low-lying and flood prone areas of all parishes until 5 o'clock tomorrow morning.

A flash flood watch means that flash flooding is possible and residents are advised to take precautionary measures, keep informed by listening to further releases from the Meteorological Service and be ready for quick action if flooding is observed or if a Warning is issued.

According to the Met Service, projections are for showers and thunderstorms, which could be heavy at times today into Sunday morning.

It says a trough induced by Hurricane Joaquin is producing showers and thunderstorms across Jamaica.

Fishers and other small craft operators are urged to exercise caution as they are likely to experience gusty winds and choppy seas in the vicinity of showers and thunderstorms over both northern and southern waters.

Davis says there have been no reports of flooding

However, he says ODPEM will have a clearer picture of the impact of this morning’s rainfall when the parish disaster coordinators report their findings.