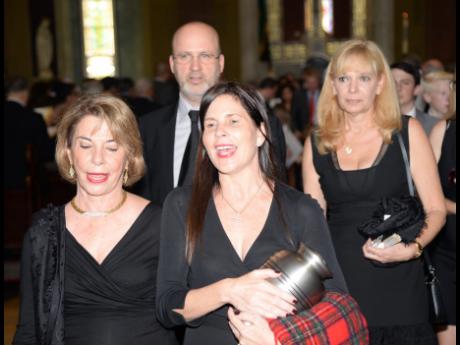 Jermaine Barnaby
Jackie Stewart Lechler (second right) carries the urn with the remains of her father, Richard Stewart, while his widow, Diana Stewart, (left) walks beside her. Richard’s son Duncan and his wife Debra Stewart are at the back.

The pews at the Holy Trinity Cathedral in downtown Kingston were filled to capacity yesterday as despite the rain, scores of mourners turned out to pay their last respects to a giant in the local automotive industry, Richard Stewart.

His love for family and his resilient spirit were traits that stood out in the mind of his son, Duncan Stewart, as he gave a tribute at the thanksgiving service.

"He did 12 operations in five years, but through all of that, he was not daunted. He always told us that effort plus hard work equal results. This kind of spirit and resilience was what helped us to be builders ourselves, and I will forever thank him," said Duncan.

"He invested wisely in family, his business and in relationships that mattered to him. You could depend on him to be authentic; whatever he said, he meant it. Once he had something to get off his chest, he would do it with no hard feelings," Duncan recalled.

"He always told us that life had challenges, but we must always find the courage to fight and push ahead because to whom much is given, much is expected," she told the gathering.