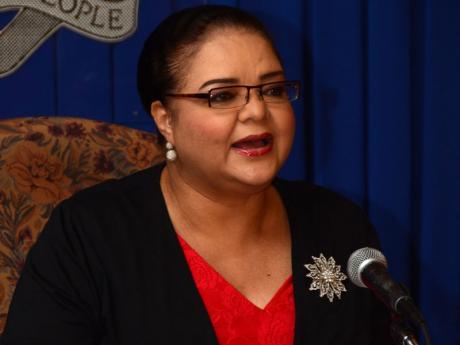 File Photo
Senator Sandrea Falconer expressed disappointment that she was made out to be a liar and sought to withhold information from the Jamaican public.

Minister with responsibility for Information, Senator Sandrea Falconer, this morning castigated sections of the media which she said maligned her character in relation to last week’s visit of Britain’s Prime Minister David Cameron to Jamaica.

Addressing reporters at this morning’s post-Cabinet press briefing, Senator Falconer expressed disappointment that she was made out to be a liar and sought to withhold information from the Jamaican public.

She says her detractors acted in an irresponsible way and steps should be taken to correct the attack on her character.

The information minister is calling for more responsible journalism and says the media should seek to correct wrongs when they commit them.

Ahead of Cameron’s visit concerns were raised about the local media being unable to ask questions of the British Prime Minister.

Senator Falconer and the government by extension indicated that it had no control over the situation as it was the British delegation which said there would be no interaction with the media.

The local British High Commission denied giving the directive and suggested that the order came from the Jamaica authorities.

The Commission later backtrack and admitted that Britain did in fact indicate that it would not facilitate interviews with local media.

Following discussions, three media houses were subsequently allowed to pose questions to the British Prime Minister after a wreath-laying ceremony at heroes circle.