The price is too high ... Bunting says lottery scamming behind Hanover killings 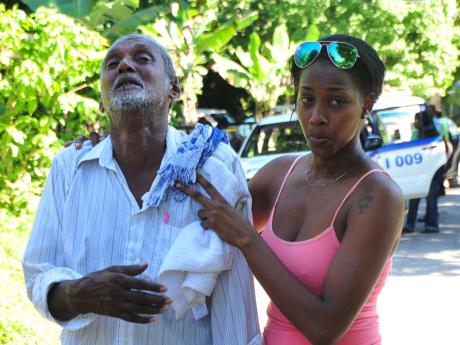 Adrian Frater
Errol Mangaroo, the father of Bran Mangaroo being comforted by a family friend.

The National Security Minister, Peter Bunting has revealed that last night’s murder of six family members in Hanover is linked to the infamous lottery scam.

According to Bunting, the continued killing of individuals, many of them innocent victims of lottery-related conflicts, is destroying the society. "This price is too high, and as a society we must put a stop to this evil practice before it destroys our country, family by family, community by community," Bunting said in a statement this afternoon following his visit to the crime scene.

He said the entire country was being affected by lottery scamming. "We are paying for it with the precious lives of innocent citizens, men women and children. We have seen where elderly persons and the very young are being targeted, not because they were directly involved in lottery scamming, but because persons with whom they were associated were involved in this illegal activity," he said.

According to Bunting, the security forces have been working consistently to prevent these “senseless” acts of violence but need more support from members of the affected communities to reject the culture of violence and to provide the police with actionable information to bring the offenders to justice.