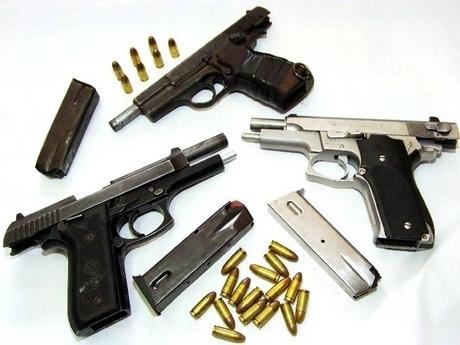 File Photo
“You have a responsibility for your personal safety, that of your family and your community. The illegal guns you ignore today could take your life or that of someone you love or respect.” - High Command

The police are reporting more success under their 'Get the Guns Campaign' with the seizure of seven guns and 33 assorted rounds of ammunition in the past 24 hours.

The police say on Friday, cops from St Catherine South seized one homemade firearm with one .38 round on Walkers Avenue, Caymanas and one man taken into custody.

Later, one Taurus 9mm pistol with eleven 9mm rounds and a magazine were seized in Rockstone district, Spring Village in the parish and one man was arrested.

Three hours after, a 9mm Bryco handgun was reportedly seized in an open lot on Brown's Lane, Central Village.

Then last night, one Heckler and Koch 9mm pistol, with a magazine containing eleven 9mm rounds were seized during a robbery attempt at a plaza on Molynes Road, Kingston 10.

It's reports are that about 7 p.m., one man was shot dead by a licensed firearm holder who was allegedly being robbed by the now deceased and two other men.

In another incident early this morning, the Constant Spring Police seized one Beretta pistol during a vehicle check point on Whitehall Avenue and arrested two men taken into custody.

Three people have been arrested in connection with this find.

The Police High Command is reminding the public to play their part in reducing criminal activities by reporting illegal weapons and other criminal offences.

“You have a responsibility for your personal safety, that of your family and your community. The illegal guns you ignore today could take your life or that of someone you love or respect.”