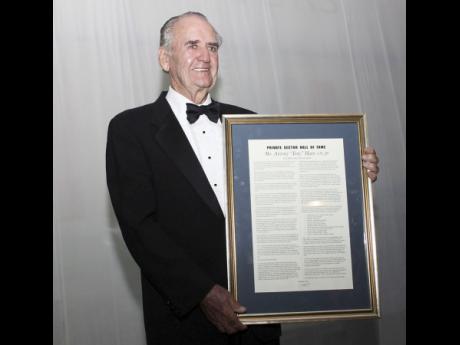 Contributed
Tony Hart holds the citation he received upon being inducted into the Private Sector Organisation of Jamaica Hall of Fame.

Tony Hart, founder of the Hart Group of Companies, may be semi-retired at 83 years of age, but he is still active in the running of the enterprise's associated businesses, and is leading a very productive life otherwise.

A business giant in Montego Bay, Hart is famous for starting the Montego Freeport industrial hub in 1967 and has founded more than 50 companies.

"I served on various boards, including the Coconut Industry Board, and I was also on Air Jamaica's board for eight years, and I made profits for seven of the eight years as its chairman," Hart continued.

Despite claiming to be retired, Hart continues to work closely with the local community in other ways and also assists his relatives in maintaining the family business empire.

"I now look after St Mary's Preparatory School, located in Montpelier, St James, which has 450 students and I am their mentor. It is a prep school with students from two to 12 years old; that is my main thing now," said Hart. "I help my son Mark with Caribbean Producers Jamaica, which is the largest supplier of goods to the hotels."

From his years as a businessman, Hart has picked up a number of key strategies which he says have aided him in his endeavours.

"Do the right thing at the right time, see opportunities, and, most important, have the right people working for you," Hart declared.