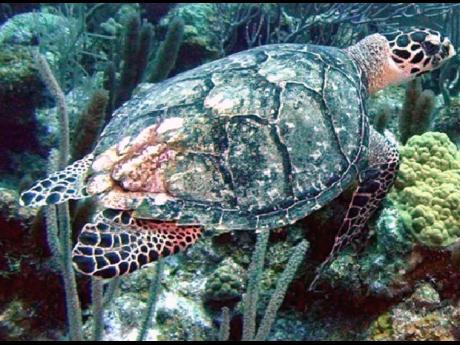 Contributed by NEPA
The Hawksbill Turtle is a protected animal pursuant to sections 6(1) and 6A of the Wild Life Protection Act, it is a criminal offence to hunt or have any part of the turtle in one’s possession.

One of the persons caught on tape slaughtering a Hawksbill Turtle in Manchester last month has been apprehended and brought before the courts.

The man was reportedly apprehended through sustained efforts by the Alligator Pond Police with the assistance from the National Environment and Planning Agency (NEPA).

He is charged with hunting and possession of a protected animal contrary to Sections 6 and 6A of the Wild Life Protection Act.

McDonald was also charged with unlawful wounding in an unrelated matter.

He is required to avoid turtle nesting sites and must not hunt or be in possession of any turtle or turtle egg.

If convicted, McDonald is liable to a fine of up to $100,000 or 12 months imprisonment on each count.

Investigations are continuing with respect to the other parties involved in the killing.

The Hawksbill Turtle is a listed protected animal under the Wild Life Protection Act.

It is a criminal offence to hunt, kill or have any part of the turtle in one’s possession.

It is also an offence to take, attempt to take, sell or have in one’s possession for sale any turtle eggs.