James' 'A Brief History of Seven Killings' was the most exciting book on the list, says judge 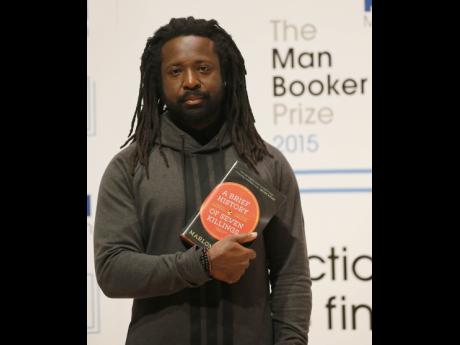 AP photo
Author Marlon James poses with his book 'A Brief History of Seven Killings' on stage at the Royal Festival Hall in London yesterday.

Marlon James became the first Jamaican winner of the prestigious Booker Prize for fiction today with a vivid, violent, exuberant and expletive-laden novel based on the attempted assassination of Bob Marley.

Michael Wood, chairman of the judging panel, said A Brief History of Seven Killings was "the most exciting book on the list" and a novel full of the "sheer pleasure" of language.

"One of the pleasures of reading it is you turn the page and you are not sure who the next narrator will be," said Wood, a professor emeritus of English at Princeton University. He said the book had been the unanimous choice of the five judges.

A Brief History of Seven Killings is the third novel from the writer, who now lives in Minneapolis.

The book charts political violence in Jamaica and the spread of crack cocaine in the US, and hinges on a 1976 attempt on the life of reggae superstar Marley – identified in the book only as The Singer. The story is told in a cacophony of voices – from gangsters to ghosts, drug dealers to CIA agents – and in dialects ranging from American English to Jamaican patois.

Critics have compared it to the stream-of-consciousness novels of William Faulkner and the hyper-violent movies of Quentin Tarantino, while James himself has cited Charles Dickens as an influence on his multi-character depiction of society.

Wood acknowledged that the book's plentiful sex, violence and swearing might put off buyers who "like to give the Booker winners to their mother to read."

But he said the novel's verve and humor would win over readers.

Wood said although much of the subject matter is grim, "a lot of it is very, very funny."

The Booker guarantees a big boost in sales for the winner, and can transform writers' careers. When Hilary Mantel won for Tudor saga Wolf Hall in 2009, she went from being a modestly successful novelist to a literary superstar.

James beat five other authors, including two Americans: Pulitzer Prize winner Anne Tyler, for the multi-generational family saga "A Spool of Blue Thread," and Hawaiian writer Hanya Yanagihara for "A Little Life," the story of four male friends, one of whom is a survivor of horrific child abuse.

The other finalists were British writer Sunjeev Sahota's immigrants' story "The Year of the Runaways"; the fratricide fable "The Fishermen," by Nigeria's Chigozie Obioma; and British writer Tom McCarthy's digital drama "Satin Island."

This is the second year the prize has been open to English-language writers of all nationalities two years ago. It had previously been restricted to writers from Britain, Ireland and the Commonwealth of former British colonies.

Wood, who like his fellow judges read 156 books for the prize, said the rule change had "widened the range of the sorts of novels being considered."

"The sheer range of stuff we read was amazing," he said.

Founded in 1969, the award is officially named the Man Booker Prize after its sponsor, financial services firm Man Group PLC.