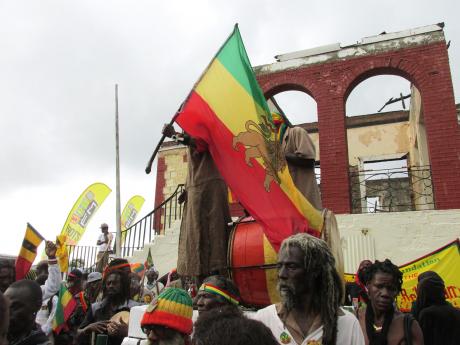 Paul Williams
Rastafarians were numerous at the vigil at Stony and the march to Morant Bay, St Thomas. 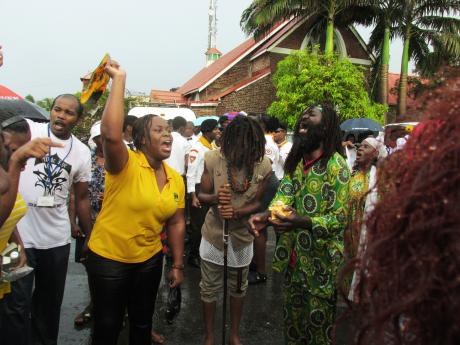 Paul Williams
People singing and dancing in the rain after marching from Stony Gut to Morant Bay, St Thomas, on Sunday.
1
2

On October 11, 1865, disgruntled peasants, led by Paul Bogle, marched from Stony Gut to Morant Bay in St Thomas to voice their grievance over social and economic challenges and what they considered the injustice that was being meted out to them. At Morant Bay, the Vestry was meeting in the courthouse.

A stand-off ensued between the authorities and the peasants, who hurled the first stones. Shots were returned, and for hours, chaos reigned at Morant Bay, and in some other villages. When it was all over at Morant Bay, the courthouse and an adjoining building were razed, and Custos Kettelhodt and

others were dead. Paul Bogle and hundreds of the rioters were subsequently killed by the authorities, who also burnt the village of Stony Gut.

That was 150 years ago, but the bravery, the resolve, and the deaths of Bogle and the other martyrs have not been forgotten, as demonstrated by a march on Sunday morning from Stony Gut to Morant Bay. People had gathered the night before for a vigil, as part of this year's commemorative activities. The process at the vigil was interrupted by heavy rains, but at the break of dawn, patrons were ready to re-enact the Paul Bogle march.

Led by a team from Irie FM, in collaboration with the St Thomas Parish Development Committee and the Paul Bogle Movement, people from many spheres of Jamaican life turned up to walk, or even to observe, and to reflect. It was an important moment, and the machetes that some people carried were symbolic of their militant mood.

But the atmosphere was also celebratory - colourful, if you will. The Rastafarians, some waving flags, were numerous. People met and greeted each other with smiles, happy to be part of the process. After the preliminaries, the march started. The people were ready.

For just over two hours, they walked, sang and chanted along the narrow mountaintop road. Near to the end of the march, as with the night before, the rains came. It might have dampened their clothes, drenched in many cases, but their spirits were on fire. At Morant Bay, the rain and breeze came from the sea, sending waiting people huddling under tents.

The march culminated in the square at the old courthouse, where people had been waiting all morning for the arrival of the marchers. In front of the old courthouse, they danced and sang in the rain as a marching band played on. Soaked schoolchildren stayed put, not one budged. Then the chants took on some currency. The revellers, led by a young Rastaman, shouted, "No prison! Reparation now!" David Cameron was not around, but they shouted some more, "No prison! Reparation now!"

They wanted justice, just as their ancestors. In the background stood the courthouse, the burnt-out symbol of justice delayed. It was there like a useless sentinel, watching the descendants of Paul Bogle and the martyrs. Embedded in its ancient stones are the cries and woes of the ancestors, and memories of what took place at that very spot 150 years ago.

After the marching band subsided, it was time for the Rastafarians and their drums, and chants of freedom, justice, redemption, and 'livity'. Their presence added to the richness of the process. It was poignancy juxtaposed against reflection. It must never happen again. But where were the government and parliamentary opposition officials?

Also missing from the mix was the statue of Paul Bogle, the greatest irony of the day.

The material representation of Bogle might be been somewhere in oblivion, but his spirit and that of the martyrs were alive and dancing in those who were present. The dust that had gathered on the memories of what he did and stood for was washed away by the heavy rains, leaving them bright and shiny, blinding, perhaps, to those who want them to be

forgotten. The people didn't move on, they moved to Morant Bay, as one radio announcer put it.