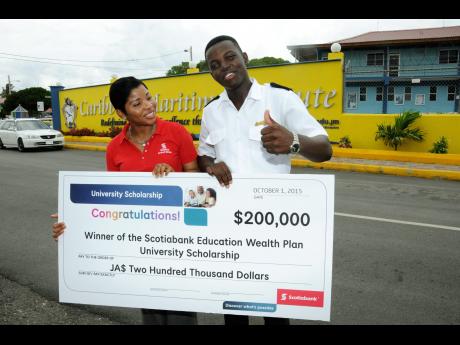 Contributed
Simone Hull Lloyd, marketing manager, Scotiabank, celebrates with Norris Watson after surprising him with a $200,000 scholarship cheque towards his tertiary education. The annual scholarship is offered though the ScotiaInsurance Mint fund.

Norris Watson was surprised by Scotia Insurance at his school with $200,000 towards his education at the Caribbean Maritime Institute.

Watson is one of three recipients of the Scotiabank Education Wealth Plan University Scholarship assistance of $200,000 over two years. The others are Deana Moo Young Campbell and Tericka Johnson of the University of Technology.

"I had no clue, and even when they asked me to guess I was at a loss, but I hoped it was money," Watson said. Fifteen scholarships and bursaries

Now in its 15th year, Scotia Insurance's scholarship product ScotiaMint has granted some 240 students grants and

bursaries to pursue studies at the secondary and tertiary levels.