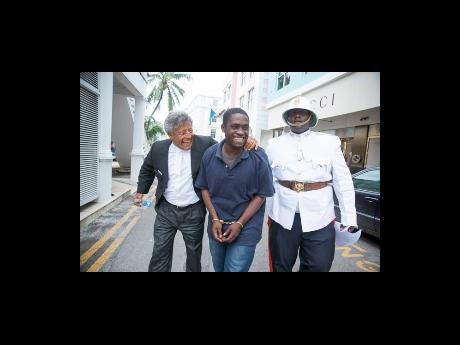 CMC Photo
A beaming Sewell (center) and his attorney Fred Smith (left). President of the Grand Bahama Human Rights Association (GBHA), Fred Smith, Q.C. had urged the Court to free Mathew Sewell and recognise that there is “no Guantánamo Bay” in The Bahamas.

The Supreme Court of The Bahamas has ordered the immediate release of a Jamaican national who had been jailed there for the past nine years illegally under immigration laws that his lawyers said do not exist.

President of the Grand Bahama Human Rights Association (GBHA), Fred Smith, Q.C. had urged the Court to free Mathew Sewell and recognise that there is “no Guantánamo Bay” in The Bahamas, where individuals can be held in secret and outside the scope of the law.

Sewell was 18 years old when he first legally came to The Bahamas to visit his father, who lives here.

At the time he was preparing to join the Jamaica Defence Force.

Now, 28, he said he plans to renew that dream upon his return home.

Smith called on the Bahamas authorities to respect the fundamental rights of every individual, regardless of their nationality.

Smith said the Immigration Department cannot continue to act as “judge, jury and executioner” when it comes to people whom they have detained since the Court is the only entity that can decide if a person is guilty of any offence under the Immigration Act.

The human rights group said that Sewell was repeatedly detained in connection with a series of alleged and trumped up charges over the better part of the last decade. It said this included a trumped up murder and a house break-in which happened while he was already in prison.

The human rights group said that all the allegations against Sewell proved to be false and he was released from prison an innocent man about a year ago. However, shortly thereafter, he was detained by immigration.

Appearing before Senior Justice Stephen Isaacs, Smith successfully argued that the committal order under which his client was being held at the Carmichael Road Detention Center was defective, having been granted under a section of the Immigration Act that does not even exist.
He said the order also listed the period of detention as “unknown.”

Smith pointed out that indefinite detention is illegal in The Bahamas “as we are not a dictatorship”, and those awaiting deportation from The Bahamas can only he held for a reasonable period of time.

“Mr. Sewell has been detained at the Carmichael Road Detention Centre since 3 November 2014. He has therefore been in administrative detention for almost a year. This is not a reasonable period of time. Indeed, on the Immigration Department’s own case, they appear to blame the delay in large part on Mr. Sewell’s father’s failure to buy a ticket to effect his son’s deportation.

“This argument is absurd. It is for the Immigration Department to ensure that detention is only required for a reasonable period of time. They cannot attempt to shift the financial burden for deportation on to the family members of those detained and then blame delays on those family members’ inability to pay.”

Smith also criticised the existing methods of enforcing immigration laws generally, noting that a number of the department’s tactics continue to be inhumane and unlawful.

He said based on previous decisions of the courts in The Bahamas dating back to 1980s, every person detained by an immigration official or other peace officer must be brought before a court within 48 hours.

He referred to the Bahamas Court of Appeal case concerning Japanese detainee Atain Takitota, who was wrongfully held at HMP and the Detention Center for more than eight years, before being released and awarded substantial damages by the court.

Smith also argued that nowhere in the Immigration Act, or Bahamian law, does the offence of having “no status” exist. He noted that there are only three immigration offences: entering without permission, overstaying or working without a permit.

Therefore, the practise of conducting raids and roadblocks in which proof of status is demanded are illegal, Smith said, referring to his own case; Smith vs Commissioner of  Police in the 1980s when the Supreme Court declared arbitrary roadblocks by the Police unconstitutional.

In response to a suggestion by the Attorney General’s office that if released, Sewell would likely be detained again under a legitimate detention order, Smith warned that his client plans to sue the government for considerable damages and any further attempts to interfere with his liberty would be treated as aggravating circumstances and increasing punitive damages in that suit.

Senior Justice Isaacs accepted Smith’s arguments and granted Sewell his freedom, instructed the authorities to return his passport which they had held for the last nine years, and ordered that they find some form status for him during the next 60 days so he has time to get his travel documents in order and return to Jamaica unmolested.