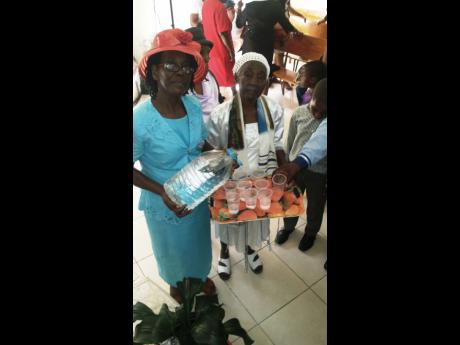 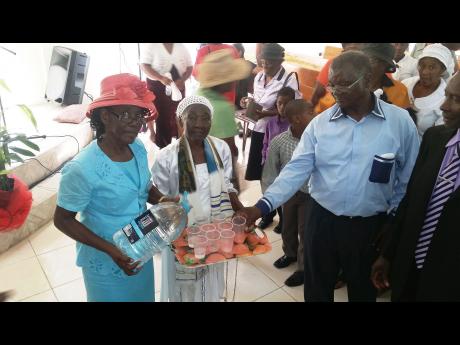 The name Cynthia Ellis may not be one that is popular nationally, but it is one that is very popular in the parish of Hanover and sections of Clarendon. The name is synonymous with a healing ministry that is based predominantly on prayer, fasting, and water.

Ellis, who is a member of the Cardwell New Testament Church of God in Hanover, has touched scores of lives with her work for the Lord. She told Family & Religion that she has been involved in the water-healing ministry for 17 years.

"I was sleeping and I got a vision from the Lord, who said to me, 'You are lying down here sleeping, and look at the people in Cardwell who I want you to go and heal'. When I woke up, I asked God what He was saying to me. I asked Him if I should really go to heal the people," said Ellis.

Ellis said she thought about what God told her to do for one week before she finally decided to ask one of her church brothers to tell her pastor that she wanted to discuss something with him. When she told her pastor about her vision, she was asked to anoint everyone in the church with olive oil during a Sunday service. This was before she was allowed to serve water.

"I did just that. I anointed everyone, even the little babies who were there. The pastor drank three caps of the olive oil and then told me to go ahead with what the Lord told me to do. Everyone lined up and I served them the water and touched them all with the olive oil, and that was where it all started," said Ellis.

She said she was encouraged by a church sister not to allow anyone to go fetch the water she uses for her healing ministry because that water source is special from the Lord. She added that God showed her a special spring where she should fetch the water, and there she has been collecting it over the years for the work she has been assigned by God.

"One day, because of drought, I asked my husband to accompany me to the source to fetch the water. The voice of God spoke to me and said I should not allow him to fetch it for me. I disobeyed God, and believe me, when he fetched the water, it changed to a different colour. I had to stand there and beg the Lord for forgiveness," confessed Ellis.

She reported that she had to stand there and pray. When she was through praying for forgiveness, the water changed to its natural colour. She also pointed out that whenever she is serving the water, the Holy Spirit does not allow other persons to serve it. God, she said, is really moving in a mighty way with the water ministry. According to the woman of God, the water flushes the system as it goes to every organ in the body.

Since she started the ministry, scores of persons from near and far, as well as from overseas, have benefitted. Ellis's anointing, under the leadership of God, has seen many persons who have been ailing healed from their infirmities.

"Many persons have been healed through this ministry. Even a child who was admitted to hospital with infection in her stomach got her healing. When she was given the holy water, all her pain and suffering that she was experiencing disappeared. She was sick for more than six months and was not getting better. Since she drank the water, she received her healing. Scores of others have been healed also," noted the water mother.

Ellis, who has been visiting Clarendon since January of this year with her water-healing ministry, shared with Family and Religion, that since she has been visiting that parish, several brethren who have been given the water have testified that they, too, have received their healing. She added that she has also received healing for an illness she had, simply because she, too, has consumed the water.

Although her ministry is one that comes from God, Ellis, 72, who never conducts her service without wearing her white apparel, pointed out that she gets a lot of fight from persons as she goes about doing the will of God. Though that is the case, Ellis pledged to continue the work for as long as God will allow her to live.

She is encouraged by the many persons who are being healed and who are testifying about God through her ministry. She said heart, breast, kidney, and other problems have disappeared from persons since she started the water ministry almost 20 years ago.