Mario Samms: A man of many hats 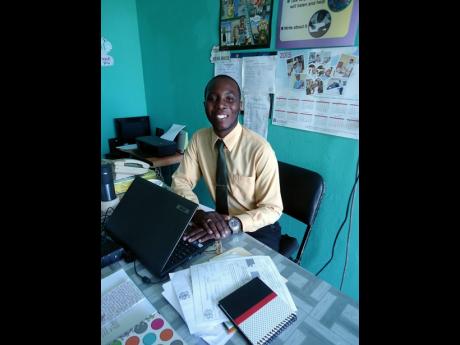 Mario Samms wears many hats. He is the upper-school guidance counsellor at Lyssons Primary School, with responsibility for grades four to six. At Christ Church (Anglican) in Morant Bay, he is also an acolyte and a prospective lay reader.

But his greatest desire, a dream he is currently working towards, is to become an Anglican priest. Samms told Family and Religion that he was convinced at age 16 that the priesthood was his true calling after he wrote his first sermon in a preacher's class.

He related that he was commended for his clarity and the power of his message, which was based on the Bible verse John 3:16. The commendations and accolades that followed at a subsequent youth Sunday, where he was asked to preach, encouraged him to follow his growing passion for spreading the Gospel. He believes that it is the will of God that he go into the priesthood.

The articulate St Thomas native told Family and Religion that he could not speak until he was six years old.

"I was making sounds before then, but I couldn't say any words. I didn't start speaking until I came to this very school (Lyssons Primary School) at six years old," he said.

Samms credits his eventual fluency and his growing faith to Lucille Kildaire, the grandmother he lived with until her death when he was nine years old, and who, with patience, helped him to learn how to speak.

"My grandmother was my role model. I initially wanted to become a bank manager because of a cousin whom I idolised, but my grandmother quickly replaced him. She was always at church, always helping the community. She sang on the choir and she was a prayer warrior. She wouldn't let anyone leave her home hungry. She always had a meal ready for someone passing through. I took those qualities from her and her strong faith in God," she said

Samms also credits his grandmother's love and firm grounding as the source that allowed him to overcome the challenges of growing up without a mother or father. He recalls that he was usually jealous of friends who would speak of their parents but decided to use his experiences as inspiration to others.

In 2009, at just 20 years old, Samms made his first application to the priesthood but was unfortunately denied because it was deemed that he did not have the right qualifications. Ultimately, he chose to enrol at The Mico University College to pursue a Bachelor of Science in guidance and counselling. Samms also underwent a year of training as a prospective lay reader, a position similar to a deacon, to assist in services and the liturgy. He is awaiting certification and licensing from the Anglican Bishop of Jamaica and the Cayman Islands, the Right Reverend Dr Howard Gregory, to perform his duties.

Though it was not a necessary step to becoming a priest, he felt it necessary to test his personal calling. His second application, after graduating from college, was also turned down, and, far from discouraging him, this has prompted Samms to immerse himself in the life of the Church, becoming active in church meetings, camps, and spiritual retreats to strengthen his spiritual life. He is also a member of the choir, and is often invited to preach at services across the parish. He told Family and Religion that he is currently in a season of silence of waiting and will reapply once he is certain it is time.

"God has placed me where I am to prepare me for the priesthood. Though I am not a priest yet, I realise I have to continue having that vision and press towards my goal. I'm not too old to achieve what God has in store for me," he said.

Samms enjoys the support of his friends and of his romantic interest, who has expressed her approval of his intentions to become a priest.

"She initially told me she didn't want to be the wife of a pastor, since she is the daughter of a Baptist minister, but after some reflection, she told me that she is comfortable with herself in her faith and wouldn't mind," he said.

Samms is also grateful for his training in guidance and counselling, reflecting that it has shaped the way he will eventually approach the ministry.