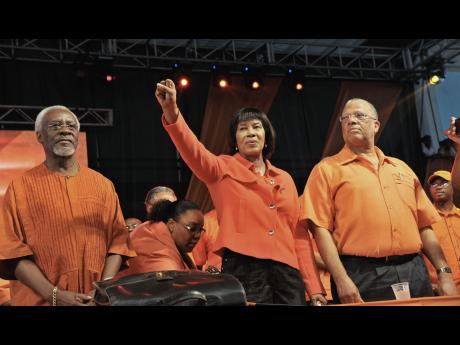 File Photo
In a release last night, the PNP said its leaders emerged from the Candidates and Campaign Managers retreat united in its confidence in Simpson Miller.

The Leadership of the People's National Party (PNP) says it is standing by its president Portia Simpson Miller despite a slew of negative poll findings.

According to a Bill Johnson poll commissioned by The Gleaner, Simpson Miller has lost favour with Jamaicans who think she is inaccessible, has not stood by a promise to lead a transparent and accountable government and should not be Prime Minister past the next General Elections.

In a release last night, the party said its leaders emerged from the Candidates and Campaign Managers retreat united in its confidence in Simpson Miller.

The party says this confidence is bolstered by key performance indicators such as the significant reduction of the National Debt, the reduction in Inflation which now stands at the lowest in more than 30 years.

It also cites the return of investor, business and consumer confidence in Jamaica to the economy.

According to the PNP, these are indisputable and tangible signs of the correctness of the decisions being taken by the Simpson Miller Administration.

It says the country has needed bold and decisive leadership for years, and Simpson Miller displays these traits.

The party did, however, note that there is work that needs to be done to retain the confidence of Jamaicans in the PNP to ensure that it can continue on the path for the further development.