Cutting down Coffie? - Family of man accused of plotting the killing of his pregnant wife cries foul 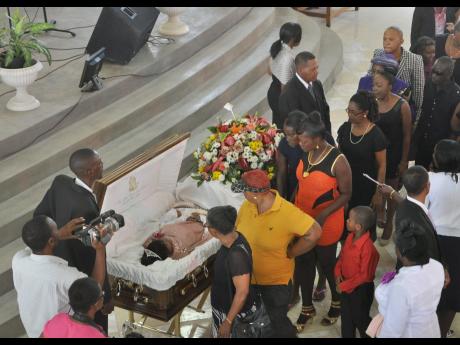 Jermaine Barnaby
Scores of persons trying to get a glimpse of the body of Sasha-Gaye Coffie during her funeral in November 2013.

The family of Sean Coffie, who is facing charges relating to the fatal shooting of his wife, Sasha-Gay, in October 2013, is claiming that a tissue of lies is being spread to discredit him before he goes to trial.

Responding to a story published in The Gleaner on September 20, the family charged that the police were giving, "false information ... intended to get the public to believe that Sean Coffie paid criminals to kill his beautiful wife".

According to the family, Coffie had neither the financial means nor (most important) reason to have his wife and unborn child killed.

"There is no basis on which the police are claiming that Sasha-Gay was killed for insurance money. Sasha-Gay Coffie had all her life insurance policies, with named beneficiaries before she was married, and of such Mr Coffie had nothing to gain from her demise."

Coffie, along with alleged paid killer Alton 'Putty Wet' Maxwell and Shevena Allen, were charged in connection with the death of Sasha-Gay in what police investigators theorise was a murder-for-insurance plot.

Coffie and Allen were also charged with soliciting and illegal possession of firearm in relation to a previous attack on his wife, which she survived before she was later killed while she was seven-months pregnant.

Initial reports were that Sasha-Gay was shot in the stomach and head, but the family has produced a death certificate which lists the cause of death as a bullet wound to the head.

"She never got a shot in her stomach or any other part of her body," said Coffie's family in a letter to The Sunday Gleaner.

The family has also challenged that Maxwell pleaded guilty to the murder of Sasha-Gay. But police investigators are adamant that Maxwell had confessed to the killing but escaped custody before he was tried.

But the family is questioning how Maxwell escaped custody twice and why he was not captured alive when he was cornered by the police in St Catherine on September 13.