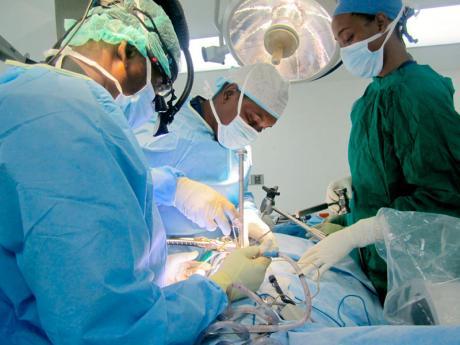 File
A team of doctors performs surgery on a patient at the University Hospital of the West Indies.

Chief Executive Officer of the University Hospital of the West Indies (UHWI), Dr Cecil White, says experts and officials will continue to meet over the course of the weekend to ensure all necessary steps are taken to stem the spread of an infection among newborns at the hospital.

Health officials have been unwilling to disclose further details about the infection which has been spreading in the hospital's Neonatal Intensive Care Units.

In a release last night, the Ministry of Health said the agent causing the infection had been identified and was being treated.  The release said an emergency meeting of the hospital board, health ministry officials, the South East Regional Health Authority, and expert doctors, including microbiologists and paediatricians, was called last night by Minister of Health Dr Fenton Ferguson, who has instructed that all necessary steps be taken immediately to contain the infection.

Earlier today, medical chief of staff at the UHWI, Professor Trevor McCartney, said there were more than one causative agents of the infection. However, he declined to name the agents and to say how many newborns were affected. He said the numbers were still being compiled. He also declined to provide information on their conditions, noting that a press conference would be held on Tuesday to provide an update.

The health ministry said it was committed to providing additional resources to contain the infection and said it was in contact with its international partners, the Pan American Health Organization and the Caribbean Public Health Agency, which are on standby to provide assistance.

A press conference is slated for Tuesday morning at 10:00 o' clock to provide an update on the issue.