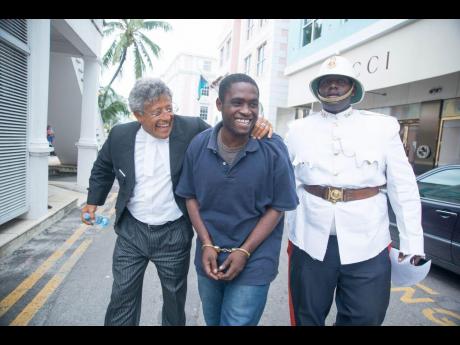 Matthew Sewell went on vacation in The Bahamas at age 18. Within 10 days of his arrival, he was accused of rape, imprisoned, and forced to spend nine years under inhumane conditions at the notorious Fox Hill prison.

Six of the nine years in prison Sewell spent without as much as a trial, simply because the system either forgot him or the police there didn't want him found, as even after all the charges - which included murder and housebreaking - were dropped, he still remained behind bars.

His attorneys describe the case as a landmark, after fighting the judicial system and getting their client released last Thursday when he appeared in the Supreme Court in Nassau.

However, that freedom carries with it a myriad of nightmares, Sewell told The Gleaner.

"I was beaten and stabbed several times, and had to fight to stay alive," said Sewell, describing his time behind bars as hellish.

lived with rats for six months

While fighting just so he wouldn't be sexually assaulted by other inmates, Sewell said he was placed in solitary confinement for six months, where he never saw sunlight for the period and his cell was taken over by rats.

"The only movements I could feel in that cell was rats crawling over my body," said Sewell. Eventually, on his release, his skin had been affected by a disease he caught from the rats.

"Fox Hill is a very dangerous prison. I was treated like a dog and placed on the condemned block with hardened criminals. It was only through the grace of God that I survived," the former Constant Spring Primary and Junior High School student said.

"If you don't have God, you die in prison," he said with a sigh, reminiscing on the fact that his childhood dream of serving in the Jamaica Defence Force was stolen by a system he felt judged him based on his nationality.

"As far as they are concerned, all Jamaicans and Haitians are bad. In fact, they just don't like foreigners, because they feel and often say you are coming to take over their country," he said.

Lead attorney in the case, Fred Smith, concurred, stating that having filed the habeas corpus, this was the first in a series of cases that will be launched against the police, immigration and prison authorities.

According to Smith, who is a human-rights activist, The Bahamas had no Human Rights Act and no ombudsman, "so this poor young man who came to visit his father as a tourist was abused by the government and should recover millions in damages".

Smith described the situation as appalling.

Sewell, who had been travelling to The Bahamas since age 13 to visit his father, Clive Sewell, who is married to a Bahamian, had last arrived on June 10, 2006.

Court records revealed that 10 days after his arrival, he became a victim of a sequence of false accusations.

First, he was accused of raping a six-year-old girl who resided next door his father's house. He was detained for two weeks without bail, then charged and remanded to Fox Hill to await a preliminary inquiry.

He was held at Fox Hill for two years before he was granted bail in May 2008. The case was finally dismissed without trial in 2013.

While on bail awaiting trial for the 2006 rape charge, Sewell was again arrested on the basis of false allegations made by his girlfriend at the time and accused as a murder suspect, a crime which took place while he was behind bars. He remained in Fox Hill without trial for more than four years.

Sewell's explanation of the life-changing and devastating incidents in The Bahamas is that he was targeted by the police.

"I was picked up one evening by the police, who tore up my documents, threatening to take me to the Clifton Pier, saying they hoped I could swim, if I couldn't tell them who I had killed."

Last Friday, when Sewell was finally released to his father, he said he went home to a meal of red snapper and rice, something he hardly tasted while incarcerated.

Clive Sewell was overjoyed when he spoke to The Gleaner. His first assignment, he said, was to get his son counselling.

"He has marks over his eyes, his forehead and elbows from the beatings and stabbings he received in prison," said the older Sewell, reminiscing that when his son was first offered bail in the sum of US$15,000, he couldn't find the money.

A painter by profession, the elder Sewell said his small earnings couldn't even help him when the bail was reduced to US$9,000.

Moreover, the prison authorities and immigration had only one thing in mind: keeping his son behind bars until they could deport him for crimes for which no magistrate had ever found him guilty.