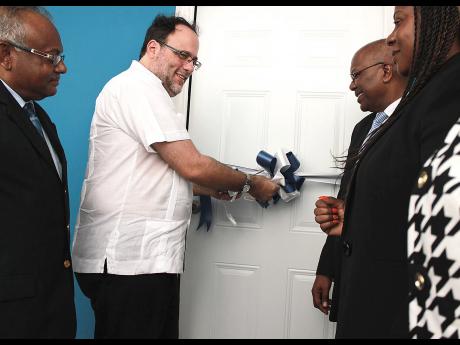 According to the latest crime statistics, around 60 per cent of the murders that took place in the parish between January and September 2015 were committed by a family member, friend or neighbour of the victim.

Golding believes the launch of the Port Maria Mediation Centre could reduce this figure significantly by helping quarrelling parties to settle their disputes amicably.

He told The Gleaner: "This new facility, the Port Maria Mediation Centre, is really going to be supporting the justice system in the parish by assisting in the mediation of disputes, both matters that have been referred by the court and matters which have not come to court, but could escalate into problems if they are not addressed early.

"These types of centres are very important in trying to alleviate tensions and the sort of issues that can sometimes escalate on to serious crimes, so I'm very happy we've been able to get it to this point."

He added: "This is the finest facility I have seen so far, in terms of space, and think we'll be able to do some good work here."

St Mary's senior resident magistrate, Andrea Collins, noted that if utilised by local residents, the $6-million facility would provide a quicker and more cost-effective alternative to settle disputes cordially, compared to going through the court system.

She said: "I greatly support this initiative and am really happy to have it on stream because we can channel many matters from the court, which will give us more time to deal with the more serious offences. I welcome this centre and think it will be of great assistance to us.

"A lot of the cases that come [through the courts] arise from domestic or community-based conflicts, and so we get a better outcome if people use this medium to resolve their disputes, rather than going through a trial and getting a guilty verdict, which doesn't necessarily give the outcome that people are looking for."