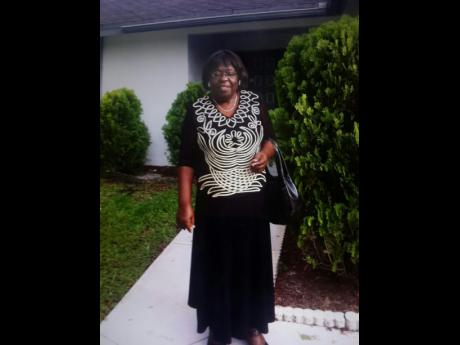 She was a teacher, not just to strangers who became her students, but also to her son.

Dorette Vancita Docosta Bather was a teacher for more than 50 years. Her life started when Albert Docosta and Lucille Barnett Dunn had Dorette on September 27 in 1942.

She hailed from Buff Bay, Portland, where she grew up with her sister, Ivy Lawson, and her cousin, Hazel Johnson. Bather was educated at the Buff Bay Government School, where she passed all her exams and went on to Shortwood Teachers’ College. After leaving Shortwood Teachers’ College, Bather taught at the Tranquillity All-Age School in her home parish. She then went to the Hope Bay All-Age School, where she taught grades one to three in all subject areas. Bather enjoyed teaching – it was her passion.

She is characterised as a loving and fun person. “She would never say a harsh word about anyone. She was just caring,” Hazel said. Although Bather and Hazel grew up together and formed a relationship, which Hazel described as ‘the Bobsie Twins’, she eventually separated as Hazel went to England and Dorette moved to another parish.

Bather moved to Linstead in St Catherine, where she spent the rest of her days. She found love in the 1970s when she tied the knot with Lascells Lucen Bather. “I loved her very much. She was a good wife.” The Dorette and Lascells union created the life of Mark, her son. “My mother was my best friend. She was the best mom in the world.”

She was a God-fearing woman. She was a member of the Church of God in Buff Bay, and she joined the Open Bible Church when she moved to Linstead. “When I was growing up, we would have devotions every morning, and that stayed with me,” Mark reflected. Although she loved God, Bather loved gardening, too. She would plant lots of flowers and plants, but she loved her bougainvillea and her ferns.

At age 73, Bather made her transition into the after-life on October 12, 2015. “I really miss her. She taught me how to drive. She was my adviser, so I really miss her,” Mark recounted. A thanksgiving service will be held on October 24 at the Charlemont Open Bible Church in Linstead, starting at 11 a.m. Bather leaves behind her husband, son, cousin, and a host of family and friends to mourn her loss.