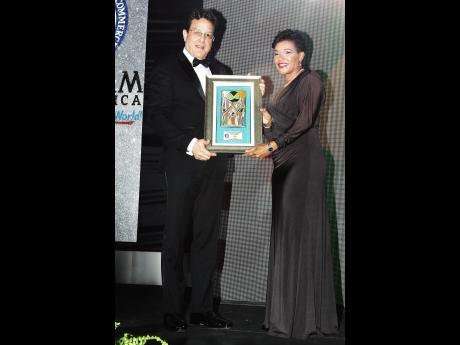 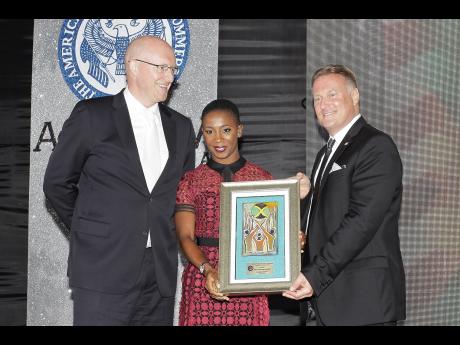 Contributed
David Butler (left), CEO, Digicel Jamaica, participates in the presentation of the award for significant contribution to brand Jamaica to Olympian Shelly-Ann Fraser-Pryce, made by AMCHAM President Ron McKay. 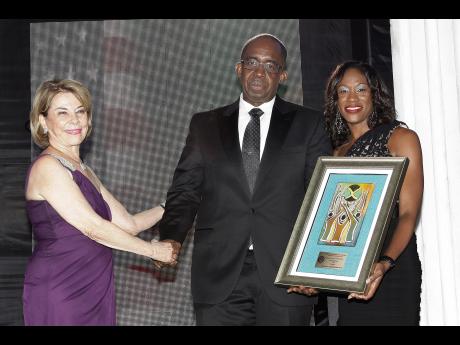 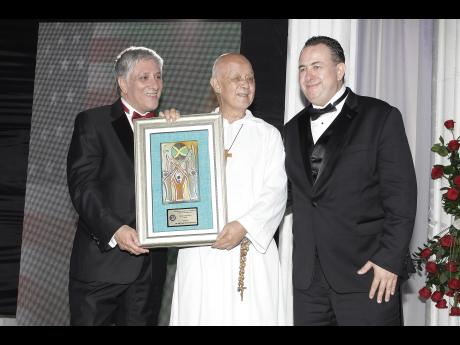 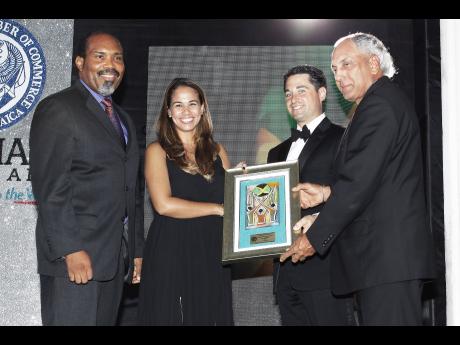 Jamaican Olympic Sprinter Shelly-Ann Fraser-Pryce touched the hearts of guests with a spellbinding impromptu thank you speech at the American Chamber of Commerce (AMCHAM) Business and Civic Leadership Awards and Banquet at the Jamaica Pegasus hotel in New Kingston last Tuesday. She was awarded by the organisation for her significant contribution Jamaica.

Following her acceptance of the award from AMCHAM president, Ron McKay in the company of Digicel CEO, David Butler, the shy Fraser-Pryce thanked AMCHAM for the award and acknowledged her inner-city Waterhouse roots.

Fraser-Pryce further said, "I am proud to represent young women who are struggling, who have to deal with so much. The journey we have in life is not just for us, but it is for others who are looking on, to inspire a generation."

The Olympian went on to note that, "What keeps me motivated is standing here to accept this award, that girl from Waterhouse, we likkle but we tallawah, we don't just represent Jamaica for track and field, not only for music but also for the incredible, awesome persons who we are."

At the 2008 Olympic Games at 21 years old she rocketed into prominence becoming the first Caribbean woman to win 100m gold at the Olympics; since then after winning the 2015 World title in the 100 meters, she is the only female to be crowned world 100 metre champion three times.

American Billionaire Investor Wesley R. Edens, principal, founder and co-chairman of the board of Fortress Investment Group LLC, a US$62 billion alternative asset management was keynote speaker. Edens, whose company will be responsible for bringing natural gas to Jamaica, expressed excitement about investing in Jamaica, pointed to extraordinary benefits to be derived from the project and noted the unique warmth of the people.

The awards and banquet is presented in association with GB Energy Texaco, began in 2010 and recognizes businesses, individuals and non-profit organisations that have been driving and achieving the economic and social progress in Jamaica through ethical leadership, stewardship, and community building activities.