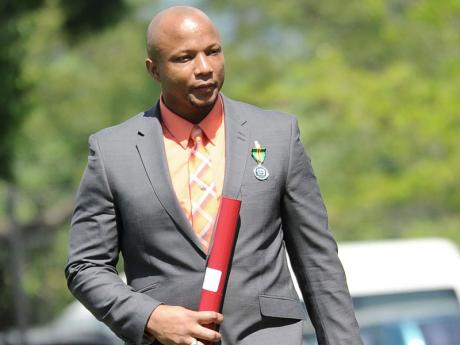 Bennett : My concern was just to try to keep him alive. I have been working in the medical field for a while so you are not too flustered by what is going on.

As the daring morning sun yawned over the lawns of King’s House Monday, orator Erica Allen retold a story that froze the moment for many: how one doctor persisted even after being involved in a car crash, to save the life of his neighbour who had suffered a collapsed lung following a stabbing incident.

Indeed, it appeared that even Dr Ricard Bennett himself rolled back in time, being awakened only when a captured audience burst out in applause.

Bennett shook his head then marched forward to collect his Badge of Honour for Gallantry from Governor General Sir Patrick Allen.

He was being awarded the National Honour for his tremendous show of courage, selflessness, and medical skill in 2014 and was among 223 outstanding Jamaican men and women recognised for their service to the country.

Bennett was at home in St Ann one night in July 2014 when he heard cries for help.

He rushed next door to find his neighbour bleeding badly from a wound to the region of his chest.

Without hesitation, Bennett went for his car and single-handedly placed the injured neighbour inside, using one hand to steer and the other to suppress the wound as he made his way to the St Ann’s Bay Hospital where he worked.

En route to the hospital, even as Bennett sought to alert other motorists of the emergency, he would be involved in a car crash.

That did not stop him.

He simply got out of the vehicle, exchanged his particulars with the other motorist and then hired a taxi to take the injured neighbour to hospital, where Bennett and his colleagues performed emergency surgery to save the life of the neighbour.

"My concern was just to try to keep him alive," the modern day hero told JIS NEWS.

Bennett said his training and experience kicked in and he simply did what he had to do.

"I have been working in the medical field for a while so you are not too flustered by what is going on," he said, adding that he hoped the recognition would inspire other Jamaicans to help others in need.

The doctor also said he felt humbled by the award, adding that he never expected it.

- JIS contributed to this story