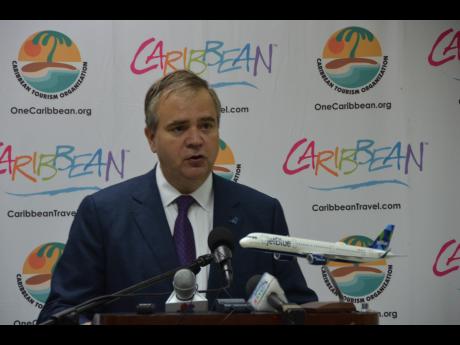 Janet Silvera Photo
Robin Hayes, CEO of JetBlue, giving the keynote address at the State of the Industry Conference in Curacao.

As JetBlue Airways makes its impact in the Caribbean and Latin America, it's CEO and president, Robin Hayes says the rest of the region should not show too much concern about Cuba taking away chunks of its tourism pie.

Hayes, addressing delegates at the State of the Industry Conference now on in Curacao, said the Cuban market is sure to expand significantly once regularly scheduled flights from the United States begin.

“But I don’t expect this growth to come at the expense of other islands. It certainly won’t for JetBlue. We’re not going to pick up all our planes and move them to Cuba," he said.

JetBlue has been flying charters to Cuba since 2011 and currently owns a third of the market in the Caribbean.

Describing Cuba as a fascinating destination, with a lot of beauty and intrigue, Hayes states that the Spanish speaking country, which is causing a lot of excitement particularly with Americans, has infrastructure issues.

"The infrastructure needs to support any influx of tourists are massive. It’s going to be a long time before Cuba’s full potential is realised. These transformations do not happen overnight," he said.

Hayes said that in the meantime JetBlue would continue to focus on expansion where it sees the greatest opportunity, "and there is plenty of that across this region".

One of the country's on which the airline is placing a lot of attention is Haiti. Earlier this week Hayes said an announcement was made to increase flights to Part-au-Prince from Boston, New York and Fort Lauderdale in response to growing demand for travel there.

"And that includes a growing element of tourist traffic. In total, we will increase our service to Haiti by more than 50,000 seats, an increase of 80 per cent since JetBlue initially entered the market two years ago," he said.

In the next year and beyond, JetBlue expects to enter several new markets. "On our most popular routes we’re going to lay on additional frequencies or deploy our larger A321 aircraft which are being delivered at a rate of about one per month. We’re already seeing these new jets in busy markets like Montego Bay and Punta Cana," said Hayes.

The airline has also announced new routes including Antigua and Barbuda and Barbados, with the latter slated to commence in April 2016.