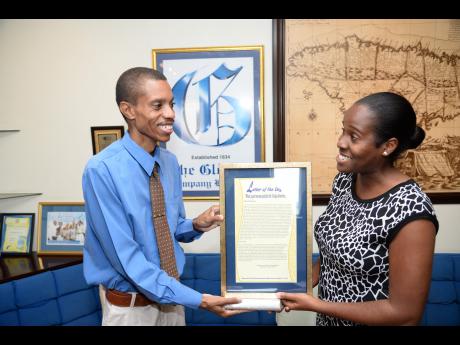 Dujon Russell last week walked away with The Gleaner's Silver Pen Award for April for his letter headlined 'What cogent reasons justified the 11-day detention, C-TOC?'

Russell's letter, published April 28, spoke to an article in which The Gleaner highlighted the actions carried out by the Surinamese authorities and the Counter-Terrorism and Organised Crime (C-TOC) Branch, which led to the search, arrest and detention of a 16-year-old boy from St Mary on suspicions of joining the Islamic State of Iraq and Syria (ISIS).

In his letter. Russell said he was "disturbed and overcome with consternation" by the events and actions of the Surinamese authorities which resulted in the deportation of the 16-year-old.

He noted that while they 'suspected' he was transiting through the Netherlands, then to Turkey, to join ISIS, the authorities had not stated any logical grounds to have arrived at such a determination, "insofar as news reports are concerned".

"What, if any, apparent facts did the personnel from C-TOC discover during their probe, which justified the boy's search, arrest and taking away his liberty? Reports are that a Qu'ran, Islam's religious text, was found in the boy's home. Was that discovery relevant and sufficient for his arrest and protracted detention? How is it possible that he apparently went through our local immigration procedures and no suspicions were raised, but a different opinion was arrived at in another country? Does that not raise questions about our surveillance mechanism?" the letter continued.

Speaking with The Gleaner following the presentation of the Silver Pen Award at the company's offices in downtown Kingston, Russell said he would continue to advocate for the rights of

"This was not a mere unfair treatment, it was a travesty of justice," he declared.

"His constitutional rights were breached because they took away his liberty without having any cogent reasons, which is required. They also had no probable cause, which is important, and when I read the story in The Gleaner, I just felt that I had to express my opinion," Russell declared.

He added: "The 16-year-old was defamed, and until he gets compensation from the courts, which he should, he will continue to suffer and persons must be held into account. I have continually expressed my concerns because I have an avid interest in the law. I have always expressed my concerns to the minister (Mark Golding), and I believe that we have to strive to be more competent and efficient because if we continue to overlook these gap, it will be an embarrassment to the state."