Divestment running on a wet track 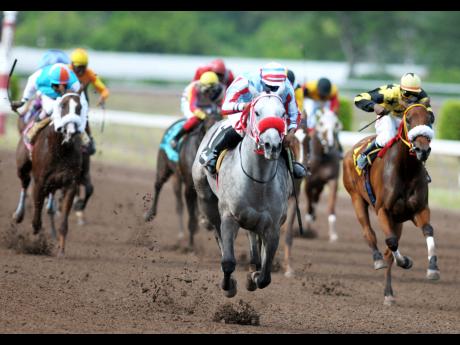 If Caymanas Park is successfully divested by the Government of Jamaica, the viability of local horse racing might very well be shakily hinged on a tote monopoly and/or subsidies from any other businesses implemented by the new operator of the 196-acre plant - a model used primarily in the United States.

Approximately two weeks before the Development Bank of Jamaica (DBJ) on Tuesday announced that it had received bids from Supreme Ventures Limited and Caymanas Racing and Entertainment Limited, the Ministry of Finance and Planning painted a grim picture of Caymanas Track Limited (CTL).

In the report, the ministry stated, "there was need for massive investments, which will facilitate the transformation of the track into a viable company and, as emphasised by the auditors, "the likelihood that the company will continue as a going concern may be in doubt".

It is understood that in the request for proposal, prospective bidders were presented with three options, the first being outright purchase of Caymanas Park with a guarantee that portions of the land be retained for horse racing purposes.

Horse racing fortunes, particularly in the United States, have been on the decline for decades, propped up by legislation in which 20 states divert casino and slot-machine revenues to help pay purse monies, the lifeblood of the sport on which owners, trainers, jockeys and grooms depend.

The racing subsidies in those states divert a percentage of table game and slot machine revenues to a state fund. In Massachusetts, 75 per cent of the fund goes thoroughbred racing industry and the rest to harness racing.

From that sum 80 per cent is dedicated to racing purses, 16 per cent towards races reserved for Massachusetts-bred horses and four per cent to health and retirement benefits for industry workers.

Jamaican horse racing benefits from no purse subsidy, depending mainly on steeply declining sales at Caymanas Park and its 60-odd off-track betting parlours.

However, should any of the two bids be successful and a tote monopoly sweetener is a part of the divestment deal, this would channel all legal sales on local horse racing through the new promoting company.

This would effectively force bookmakers to do one of or a combination of three things - either operate as agents of the new company, on a commission basis; change their business model to that of making their own odds, no longer pay a rights fee to the promoting company, an option which can almost be thrown out the window, considering the threat of corruption which involves race-fixing and doping; or they could shun local racing altogether in favour of overseas racing and sports betting.

A multitude of factors are against Caymanas Park being a viable entity without purse subsidies, taking into consideration what is happening in the United States.

The home page of the state of Arizona, azcentral.com, earlier this year featured the wane of horse racing in the United States, using the state's Turf Paradise's failing fortunes as an example of what was happening nationally in the sport.

The online article was captioned, 'Getting back on track: Horse racing scrambling to attract fans, stay relevant'.

Written on the eve of the Kentucky Derby, it read:

"The pageantry of the Kentucky Derby glosses over the many challenges facing horse racing. Competition from casinos and a prolonged loss of fans threatens the sport of kings in Arizona and elsewhere.

"Don't let the floral hats, the party atmosphere and other trappings of wealth at this year's Kentucky Derby deceive you. These are challenging times for the horse racing industry.

"The number of races, the amount of dollars wagered and other key measures have been declining as the thoroughbred-racing business struggles to stay relevant."

Noting the fate of smaller Arizona tracks, the report stated: "Tucson also has a track, but it's smaller and faces an uncertain future. Owner Pima County for years has sought to close Rillito Park and turn it into a soccer complex, butting heads with local racing enthusiasts. A third Arizona track, Yavapai Downs in Prescott Valley, has been closed since 2010.

"Even Churchill Downs Inc., the company that puts on the Kentucky Derby, now generates more revenue from its string of casinos than from racing at its tracks."

Similar to Caymanas Park, it was found that racing in the United States needed to attract more women and younger fans.

"Racing suffers from negative perceptions and confusion. Complicated racing forms and obtuse terminology frustrate potential new fans, some of whom feel embarrassed and intimidated in the presence of experienced bettor," the report added.

A tote monopoly would definitely lead to increased sales. However, it should be noted that, even with a huge subsidy and tote monopoly, the United States' racing industry remains on shaky ground. One of the country's oldest tracks, Suffolk Downs, Boston, was closed for almost a year, recently reopening for a three-day meet.

It has been reported that few United States tracks even keep attendance numbers anymore because the number of spectators has dropped off dramatically, similar to Caymanas Park where gate receipts fell by $5.6 million for the last financial year.