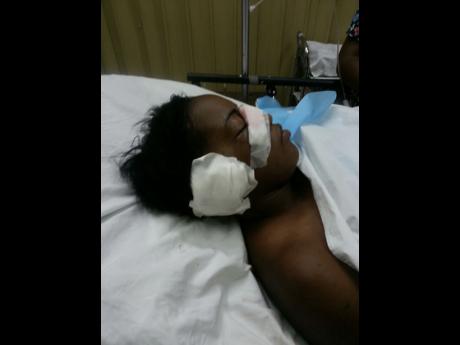 Contributed
Rashaye Kenton, after being shot in the head in downtown Kingston in early August. 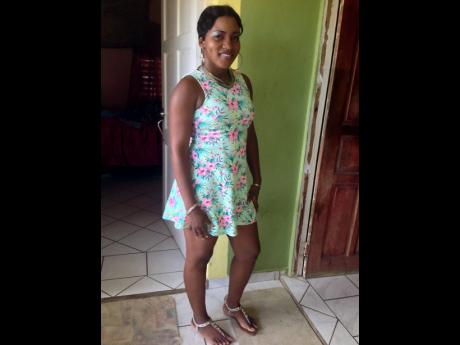 Contributed
Rashaye Kenton at home before the incident which left her partially deaf and blind.
1
2

On August 5, 22-year-old Rashaye Kenton, affectionately known as Poochie, was in downtown, Kingston, with a relative, picking up a cake for her son's birthday the next day.

Kenton had no idea the simple errand would forever change her life. She related to Family and Religion that shortly after she arrived at a restaurant on East Queen Street, gunshots rang out. She ran into the restaurant to get out of the line of fire, where she collapsed. Initially believing that it was as a result of sickle cell disease, from which she suffers, she was eventually told that she had been shot in the head.

"I just felt dizzy and dropped. I didn't even realise I got shot. I just heard my cousin crying. I thought I got shot in my ear and I got a handkerchief and held it up to my ear. Somebody helped me off the ground," she recalled.

Kenton made her way to a car, begging the occupants to take her to the hospital.

"If I hadn't begged those people to take me, I probably would have died. I didn't know the people. I just sat in their car and begged them to help me," she said.

At the Kingston Public Hospital, Kenton was admitted with a gunshot wound to the head. The bullet had pierced under her right eye, then exited through the back of her head, destroying her inner ear during the process.

Kenton's life has been thrown into upheaval as a result of the injuries she received. She is now blind in her right eye and deaf in her right ear. She suffers from nerve damage and constant headaches, and her equilibrium is off, severely affecting her balance. More tragically, the St Thomas native has had to give up pursuit of a bachelor's of science degree in teaching at the G.C. Foster College, and cannot work. She also has challenges caring for her one-year-old son, finding it difficult to lift him and monitor him properly.

"It's a hard blow for her," Kenton's mother, Deana Taylor, told Family and Religion. "She was always an independent person - playing her netball and always doing something part-time. She was supposed to start working soon, but she has to give that up. Worse, she can't take care of her son the way she wants."

Kenton now depends on her parents, and the father of her child, a situation that sometimes leaves her feeling discouraged. The family has already spent more than $200,000 on medical expenses, and is expecting the bills to rise. The Morant Bay Police, after holding a fund-raiser, donated a substantial amount to the family, for which Kenton is very grateful. But her hope is that one day she can put her life back together and pick up where she left off.

"I'm just taking it one day at a time now, and following the investigation. I hope that, eventually, I can get a job and be able to take care of myself the way I want," she told Family and Religion.