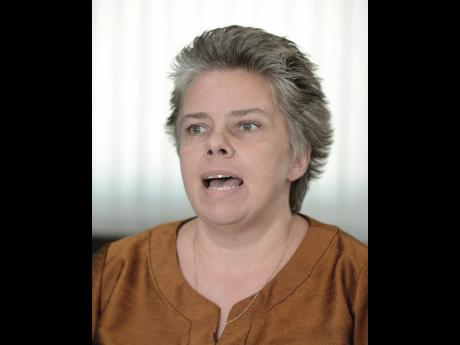 "If there are no consequences to raping children, then how are citizens going to trust the system?"

There are more concerns today about the low level of conviction for the sexual abuse of children locally.

This time it is Lone Hvass, the United Nations Children's Fund (UNICEF) deputy representative in Jamaica, who is warning that the low rate of conviction in child abuse cases and the detention of children in lock-ups when they are in conflict with the law are two issues that the country needs to address urgently.

According to Hvass, more convictions in child abuse cases will go a long way in restoring faith in the local justice system.

"There must be justice for children, otherwise no Jamaican will have faith in the justice system. If there are no consequences to raping children and being violent against children, then how are citizens going to trust the system?" Hvass questioned during a Gleaner Editors' Forum last week.

"If you look at justice for children, it is not up to speed, and we would like it to be up to speed."

But Minister of Justice Mark Golding emphasised that there are serious challenges in getting convictions in child abuse cases.

"We have a cultural challenge in Jamaica with child abuse because we have some cultural practices where people think that they have a right to abuse children," Golding told The Sunday Gleaner.

"So it is a broader question than just the law and is a question of really trying to reproggramme that aberrant thinking so that people realise that children are to be cared for and not abused, especially sexually."

Hvass, however, said that while she is aware that there is a huge problem with under-reporting, some of the challenges persons face when trying to report cases is also to be blamed for the low conviction rate.

"We know that when people come to report cases, their meeting with the system is quite fragmented. The child-protection sector in Jamaica is a little bit fragmented - to put it mildly," Hvass said.

UNICEF's activities in Jamaica over the years have focused mainly on children, health, and education, but now, the agency is planning to focus more on safety even as it admits that there are still challenges in the initial core areas.

"Safety and justice are two big pillars for us going forward," said Hvass.

"We do work around training the justice operators in how to treat with children, and not just the justice system, but starting with the police. We have been very supportive of their Child Diversion Policy."

The Child Diversion Policy, which was approved by Cabinet and has been tabled recently as a White Paper, provides for the establishment of parish committees to deal with children's issues.

Children who come into conflict with the law can be referred by the police to the parish committees, which will comprise representatives of non-governmental organisations and others who will have responsibilities for care and rehabilitation of these children.

"But these would be cases that are assessed and deemed appropriate to be dealt with in that way," said Golding.

"So it depends on the nature of the child's conduct. So if the child stabs and kills somebody, this wouldn't be handled in that way."

Golding said that in addition to the child-diversion programme, other things have been put in place to improve the system such as the Evidence (Special Measures) Act.

This allows for children to have their evidence taken by way of a video recording rather than giving evidence in court.

"We also have a bill, which is not yet in Parliament but has been drafted, to create some stiffer penalties for parents who don't show proper care and attention to their children and allow their children to be roaming at nights. We will also be stiffening the penalties for persons who are found guilty of abuse against children," said Golding.

"That legislation is now drafted and should come to Parliament within the next few months."