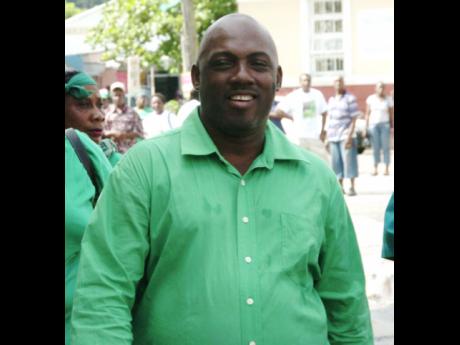 With the People's National Party (PNP) machinery in turmoil in East Portland, the Jamaica Labour Party's (JLP) standard-bearer in the constituency, Derron Wood, believes the stars have aligned to ensure his victory in the next general election.

Wood, who is currently the minority leader in the Portland Parish Council and councillor for the Fairy Hill Division, told The Sunday Gleaner that with the hard work his team has put in so far, he is confident that he is way ahead of the PNP.

"Any talk of a tainted past or my alleged involvement in a form of criminal activity is mere propaganda on the part of the PNP," said Wood, who has long had to combat questions about his character.

'I will not be deterred'

"I am well aware of their intentions to try and smear my campaign, but I will not be deterred. I am a politician, and with East Portland split right down the middle among supporters from the camp of the incumbent and a recent challenger, I aim to capitalise on that.

"On a scale of one to 10, I rate my chances of winning at nine. I am also well aware of the margin of victory by the PNP in the last election, however, I can assure you that when the abeng blows, I will be the new member of parliament," added Wood.

East Portland has been a traditional stronghold for the PNP, with the exception of 1980 when the JLP's Anthony Abrahams defeated the PNP's Keith Rhodd, father of Dr Donald Rhodd, who was to win the seat in 1997 and hold it until 2007 when he walked away from representational politics.

In the last general election, the PNP's Dr Lynvale Bloomfield polled 9,316 votes to defeat the JLP's Patrick Lee by 1,246 votes.

But Bloomfield has since fallen out of favour with some PNP supporters in the constituency and was challenged by Andrea Moore for the right to remain the party's candidate in the next general elections..

Moore defeated Bloomfield by eight votes in a delegates race, but news has since emerged that the leadership of the PNP has decided to ignore the result of the election and stick with him.

Since then, Moore's supporters have mounted repeated protests over the decision, vowing to stay away from the polls if Bloomfield is the name on the ballot.

This has given Wood a fillip, but some Comrades in the constituency are adamant that with the questions remaining about his tainted past, there is no way he can beat anybody nominated by the PNP.

Wood has scoffed at this claim. "There is no evidence to substantiate those allegations. The PNP machinery in East Portland has weakened significantly over the past three to four years, long before they had their internal election," said Wood.

"People are hurt, and they have been suffering for a long time. What has happened, as it relates to the internal election, is that the people are fed up with the kind of leadership they have been getting. I am that renewed hope, and I am the right man for the job," declared a confident Wood.