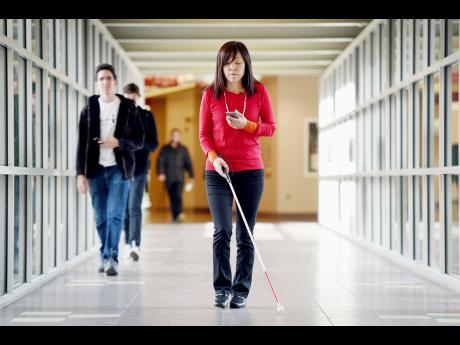 TNS
Chieko Asakawa, an IBM fellow and visiting faculty at Carnegie Mellon University, uses a smartphone app to navigate through the CMU campus. She and others at the school have developed the app for those who, like Asakawa, are visually impaired.

Previously, when Chieko Asakawa navigated her way across the Carnegie Mellon University campus, she used her white cane to identify obstructions with her ears alert to recognizable sounds and intuition in full power to keep track of her location.

She is blind. So the IBM fellow from Japan and visiting faculty member at the university's Robotics Institute would count steps and use known landmarks to document her progress. But if someone stopped to chat or bumped into her, she lost her step count and became disoriented.

"You have to always concentrate," she said. "For us, you are always thinking how many steps to the next turn and where you are. You can't walk while thinking about other things. It's very easy to get lost if you are not careful."

But this week, Asakawa walked with her long, white cane through Newell-Simon Hall, including an elevator ride, to an ATM in Ween Hall, with assistance from the NavCog app downloaded on to her smartphone. Like a GPS system it provided a voice that described distances, what directions she was to turn and when she arrived at landmarks and the ATM.

NavCog, which she developed with help from Kris Kitani at Carnegie Mellon's Robotics Institute and IBM, now is available for free at the App Store downloads on iTunes. It helps people with visual impairment to find their way indoors and out. While still in pilot phase, the app and its open-source technology allows others to advance the technology and expand areas where it can be used.

NavCog uses Bluetooth sensors placed at turns, intersections and important destinations (elevators, entrances or ATMs) to provide one's position within three to five feet of actual location. Using a map editing tool and localisation algorithms, it can identify your location almost in real time, which direction you are facing and additional information about your surroundings.