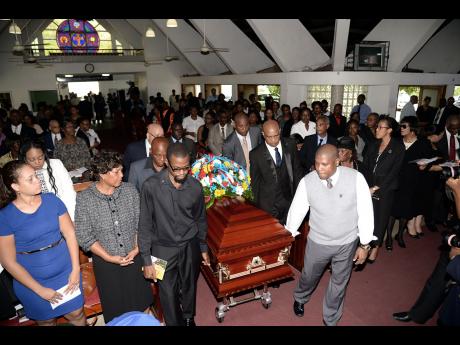 Jermaine Barnaby
Family members look on as pall-bearers bring in the coffin containing the body of Michael Shaw during his thanksgiving service at the Webster Memorial United Church on Half-Way Tree Road in St Andrew last Thursday.

Those who knew him best described him as a selfless and a gentle soul.

But at the JIS, his colleagues knew him simply as Shaw.

When he was growing up, his interest was always in films, which generated his passion and love for photography. His favourite type of films was westerns.

Shaw started his life in photography at 19 years old at The Gleaner Company, where he spent close to two decades and met his lifelong friend, Melroy Sterling.

Sterling fought a losing battle when trying to hold back his tears as he shared with The Gleaner how shaken he was when he lost his friend.

"We practically did everything together," said Sterling.

"If he bought a new car, I would do the same. We would talk on the phone to and from work every day, and we have been close ever since we met at The Gleaner Company.

"He practically died in my hands and Jamaica has lost a good man. I have lost my best friend," added Sterling.

Shaw spent four decades working as a photographer and worked with The Gleaner, JIS, The Observer, and Jampress.

However, most of his life was spent at the JIS, where he worked for four years at first and then came back in 1996 and continued there.

According to JIS CEO Donna-Marie Rowe, she met Shaw while working at the JIS as a public affairs officer in 1996, and he was, to her, a dependable person.

Junior Dowie, retired photographer at The Gleaner Company, said the thing he remembered the most about Shaw was that he was a hard-working and responsible person.

Shaw died on September 30 after covering his final assignment for the JIS - the meeting between Japanese Prime Shinzo Abe and Prime Minister Portia Simpson Miller.

He has left behind siblings, children, and grandchildren.

He will be missed by his family at the JIS and especially the photographers, who knew him well from both the JIS and other media houses.