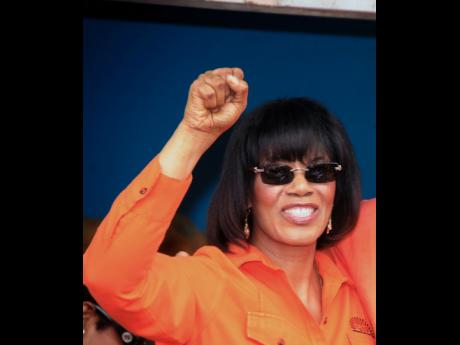 It was a subdued People's National Party (PNP) President Portia Simpson Miller who stepped up to the podium to address party supporters shortly after 9:30 p.m. at a mass rally in Petersfield, central Westmoreland, on Sunday night.

Speaking mostly in a low tone from a prepared text, Simpson Miller, who recently had a bout of laryngitis, told the audience that she was there to "reason with" them in her speech, which lasted for approximately 40 minutes.

"Tonight, we gather here in Westmoreland to have a little reasoning," she said. "And I want to reason with you. I understand the other gentleman (Andrew Holness) was here this afternoon, and I am sure he would have loved to have a quarter of this gathering. I want to say to that man, don't test Westmoreland; Westmoreland is PNP country."

But while most supporters remained in the venue, many of those who were earlier dancing and blowing vuvuzelas, became restless and found other ways to amuse themselves, even as the party president reeled out an extensive list of capital projects which had been implemented within the parish under her Government. Others used the opportunity to take refreshment breaks, engage in conversation with each other or otherwise wander around the venue, not paying attention to the presentation, which Simpson Miller used to focus on her party's work on the Jamaican economy.

She also took another jab at Holness, who had earlier that day staged what she said was a poorly attended meeting at the Mannings School in Savanna-la-Mar.

"Comrades, the man came down here today; he passed me on his way out of the parish. But he was not looking very well at all, and when I arrived here, I realised why he was looking so sad," quipped Simpson Miller.