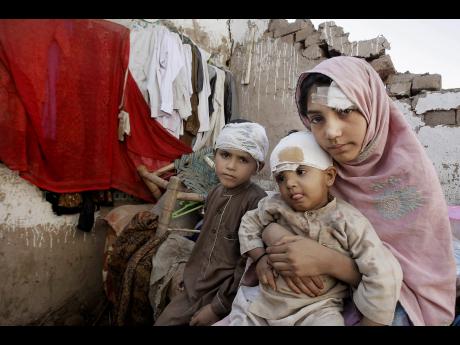 AP
Pakistani children sit in the rubble of their home damaged from an earthquake in Peshawar, Pakistan.

Afghanistan and Pakistan were scrambling yesterday to rush aid to survivors of this week's magnitude-7.5 earthquake, as the region's overall death toll from the quake rose to 385.

Pakistan's disaster management authority said the number of dead now stood at 267, with 220 people killed in the northwestern Khyber Pakhtunkhwa province and another 47 elsewhere in the country.

Afghanistan has reported 115 dead and 556 wounded, while three people died on the Indian side of the disputed region of Kashmir.

The head of the Afghanistan National Disaster Management Authority, Wais Ahmad Barmak, told parliament that 7,630 homes had been destroyed and around 1,000 animals killed. In battered northwestern Pakistan, more than 10,000 homes were damaged, as well as 147 schools, officials said.

The quake, which struck on Monday, was centred in Afghanistan's sparsely populated Badakhshan province bordering Pakistan, Tajikistan and China.

The poverty-stricken region is vast, with mountains and valleys that make it difficult to reach affected areas. Taliban members are active in some parts, further complicating access, Barmak said.