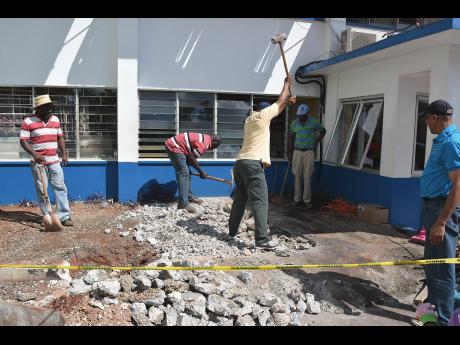 Tamara Bailey
Members of the Seventh-day Adventist Church in Mandeville begin the excavation for expansion of the waiting area at Mandeville Police Station.

In dire need, the police at the Mandeville Police Station graciously welcomed the donations of appliances, along with funding and labour, for building expansion from members of the Seventh-day Adventist community on Sunday.

As part of their 125th anniversary celebration as a church in the island, Everett Brown, president of the Jamaica Union Conference of Seventh-day Adventists, said it is important that the church gives back to the community, and particularly those who serve the citizens of this country.

"...We felt we needed to touch the lives of a particular group of people, and the police having served us well, we thought we would partner with them and see how best we could make their working environment more conducive in addressing the crime problem we have in Jamaica," Brown told Rural Xpress.

After assessing the needs of the station, it was only appropriate for the station to have the female's bathroom retrofitted, an expansion of the waiting area and traffic office, along with a donation of two microwaves and three fans.

"The needs are monumental, but the Adventist society has chipped in and it is certainly a bucket full; it's more than a drop in the bucket ... they didn't have to do it so whatever they are doing, we must appreciate it, and highly so too ... it's a significant contribution and we certainly appreciate it," said Melvin Kerr, deputy superintendent of police (DSP).

With the outreach project needing long-term attention, Brown is looking forward to what the partnership of the church organisation and the police can further yield.

In addition, the union conference will be providing counselling for police personnel who are grieving and/or going through depression.