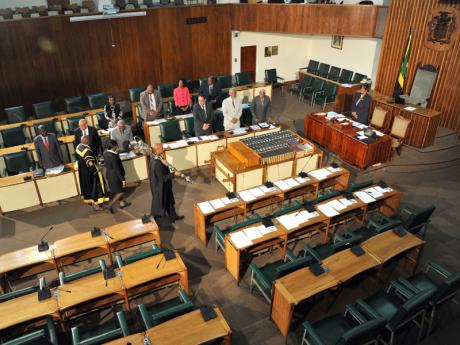 Empty Opposition benches in the Parliament today as the sitting got under way at Gordon House.

Opposition senators seem set to again boycott the sitting of the Upper House Friday despite today's lifting of the suspension of their colleague Marlene Malahoo Forte.

All eight Opposition senators stayed away from the Upper House today prompting the Government to suspend the debate on the three bills to remove the UK-based Privy Council as Jamaica's final appeal court and replace it with the Caribbean Court of Justice.

"Lifting the suspension takes us a bit further, but it doesn't take us where we need to be," Opposition Senator Kamina Johnson Smith said on RJR's Beyond the Headlines this afternoon.

She said the Opposition is still awaiting an apology from the Senate President Floyd Morris, as well as his response to a letter that was submitted by Opposition members.

Morris has said he will not say sorry. But the Opposition members want the Senate president to review his actions which would help them to determine whether to move a motion challenging Morris' actions.

Opposition and government senators have been at odds since Malahoo Forte's suspension on Friday after she failed to produce a copy of a letter from which she read during her contribution to the CCJ debate.

On Monday, Leader of Opposition Business, Tom Tavares Finson, wrote to Senate President, Floyd Morris, informing that his colleagues would stay away from the debate until the suspension is lifted and an apology is made to Malahoo Forte.