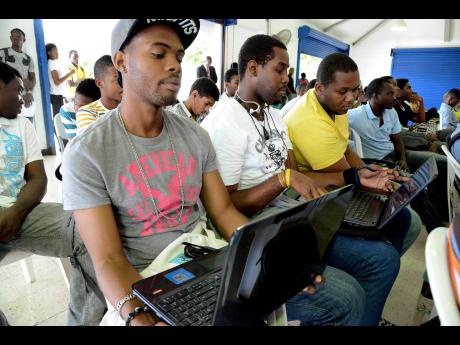 File
Students (from left) Mathieu Nesbeth, Thromo Brown and Ramon Francis of the HEART Trust/NTA checking they Laptops during the official launch of its Microsoft IT Academy. 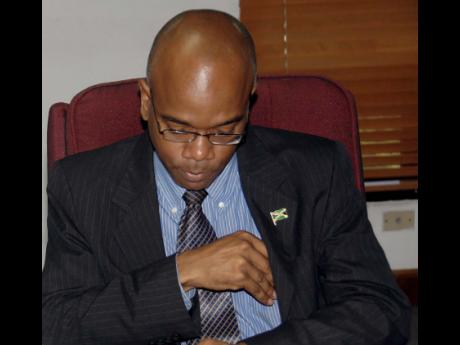 Four security companies, three universities, two hospitals and a media house, are among the 20 entities which owe just nearly half of the $655 million dollars in payroll deductions not paid over to the Human Employment and Resource Training Trust, National Training Agency (HEART Trust/NTA) at the end of August.

But the training agency says its operations are not compromised by the outstanding debts.

“There are more than one revenue sources for the Trust but the three per cent employers contribution is our major revenue each year,” Kevin Mullings, senior director of the HEART Trust /NTA told The Sunday Gleaner as he pointed to other sources of income such as Cardiff Hotel and Spa in Runaway Bay, St. Ann.

“Each year we look closely at the economic climate and each parish and we drill down to what is happening at the collectorates and our income budget is carefully crafted to include provisions such as the arrears,” added Mulling who noted some $200 million of direct arrears is targeted for collection each year.

Mullings said while attempts are made to collect the arrears the Trust accepts that there are entities which do not pay, not because they have no intention of paying but because they might not be aware that they should pay.

“I am not  familiar with any tax environment where everybody knows that they should pay and do pay,” said Mullings.

At the top of the list of companies who owed the Heart Trust/NTA at the end of August was the St Andrew based security firm, Protection and Security (2011) Limited, which is reported to owe a combined total of $78.852 million.

However this claim is being contested by the company, despite a court order that it should pay the outstanding amount.

“This firm was audited in July 2012 and legal action was taken in October 2012. Despite a court order there have been no payment due to the Government of Jamaica and security companies unable to arrive at an agreement of paying statutory deductions for guards, who they consider to be contractors.  The company will not pay until the issue is settled,” said a note attached to the list submitted to the HEART Trust/NTA directors.

Efforts to contact the principals of the company have so far been unsuccessful and the Ministry of Labour and Social Security said while it was aware of the plight of security guards it does not have the power to rule on the matter.

According to the ministry it remains committed to doing everything in its power to ensure that this important category of workers enjoy decent work.

Second on the list of chronic delinquents is Last Resort Detective Agency, a company with address listed as Mount Salem, Whitesands, St James which has listed among its principals a potential candidate for the People’s National Party in the next general elections.

The Revenue Services Department of the Trust reported that, “at the court hearing on August 27, 2015, an order was made for monthly payments of $850,000 on the arrears with effect from August 28, 2015. This order was however disobeyed. Tax Administration Jamaica, will be informed of this.”

Medical Associates Hospital is one of two health facilities among the chronic delinquents with a reported debt of $22. 9 million when it was audited in 2012.

However the hospital is making good on its promise to pay $75,000 per month which was the arrangement with officials of HEART.

The Nuttall Hospital with a debt of $6 million is number 16 on the list of the 100 chronic delinquents of the company. That hospital is paying $100,000 monthly to clear its debt.

With a liability of $25.8 million, Minott Services Limited, is also among the top debtors. Already taken to court, the company was reportedly ordered to pay $150,000 monthly, but HEART said only $75,000 has been paid on the account.

International University of the Caribbean has an outstanding balance of $14.9 million down from the initial liability which was reported at $15.9 million. The university is paying $340,000 monthly in an agreement with the Trust.

Another educational institution, Northern Caribbean University, is reported to have an initial debt of  $11.9 million. That university reportedly made an initial payment of $2.5 million on September 1.


Top 20 entities with outstanding payments to the HEART/Trust NTA at August 31, 2015