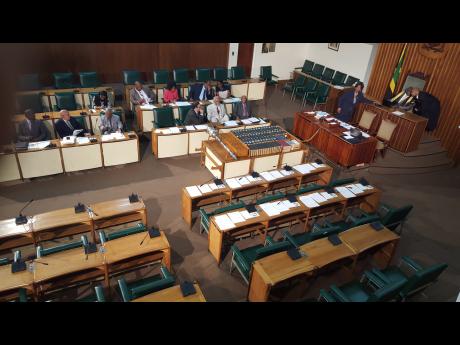 File Photo
In this file photo all eight opposition senators stayed away from yesterday's sitting of the Upper House. Business continued for a second day without the participation of the opposition members today.

Business in the Upper House of Parliament continued for a second day without the participation of opposition members.

The House began debate on the Cybercrimes Act, despite a boycott by the opposition senators protesting the suspension of their colleague Marlene Malahoo Forte.

However, the Government has indicated it will take action to have the stalled debate on the bills to establish the Caribbean Court of justice (CCJ) resume regardless of whether opposition senators show up next week. The threat was made by leader of government business in the Senate, A.J. Nicholson, at the start of today’s sitting.

Leader of Government business in the Senate, AJ Nicholson

Opposition and government senators have been at odds since the suspension of Malahoo Forte on Friday after she failed to produce a copy of a letter from which she read during her contribution to the CCJ debate.

On the first day of the boycott yesterday, government senators approved a motion to lift the suspension.

READ: KD Knight: I hope senators will put the nation before self and continue CCJ debate

However, the opposition has insisted on an apology from Nicholson and Senate President Floyd Morris.

This morning Morris said the opposition members would have to come to the senate if they wanted to have the issues resolved.