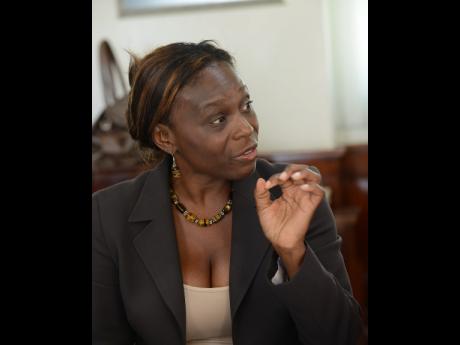 Ian Allen
Dr Elsie Laurence-Chounoune: Jamaica is prone or subject to natural disasters, such as hurricanes as well as manmade maladies such as crime, that can hinder the progress of Vision 2030.

But for possible fallout from natural disasters and negative social effects from an austere International Monetary Fund (IMF), Laurence-Chounoune asserted during a Gleaner Editors' Forum last week, that the agenda remains intact.

Vision 2030 Jamaica is a strategic road map to guide the country to achieve its goals of sustainable development and prosperity by 2030.

Laurence-Chounoune said this was based on national consultations over the past three years, involving the Planning Institute of Jamaica.

"While I cannot speak definitively about how realistic, I can say that there is a good chance that most of the targets could be achieved if most of us work together on that," she said.

Laurence-Chounoune said the multifaceted UN components which are working in Jamaica have been tasked to tackle the project in a unified way.

"We have been requested by the Government to see how we can work more cohesively, as one agency to make Vision 2030 work," said Laurence-Chounoune.

She said that the partners, including the Government, are of the view that it is achievable if they work together.

Laurence-Chounoune acknowledged that there are inevitable risks that could affect the progress of Vision 2030.

"Jamaica is prone or subject to natural disasters, such as hurricanes as well as man-made maladies such as crime, that can hinder the progress of Vision 2030," asserted Laurence-Chounoune.

"It can happen anytime, but I am hoping this is not the case," she added.

Noting that Jamaica is on target with the IMF, having passed nine tests and being on the 10 review, Laurence-Chounoune said this was a good sign.

"It is a very rigid programme and I think that Jamaica is doing a very good job of meeting the targets," said Laurence-Chounoune.

She noted, however, that, on the other side of the equation social programmes have been negatively impacted because of fiscal space constraints.

"We are not able to deliver as much as we would like because of the constraints of the ceiling that is being placed on Government agencies to deliver," said Laurence-Chounoune.

In crafting Vision 2030, the Government noted that Jamaica's development has been characterised by paradoxes and potential.

Resource constraints and the challenges of economic dependence, including marked inequalities in wealth and opportunity, have been blamed on the economy not reaching its full growth potential.

It was against this backdrop that Vision 2030 was conceived.