West Kingston Enquiry: I fired my AK until my finger was numb - Gangster's diary 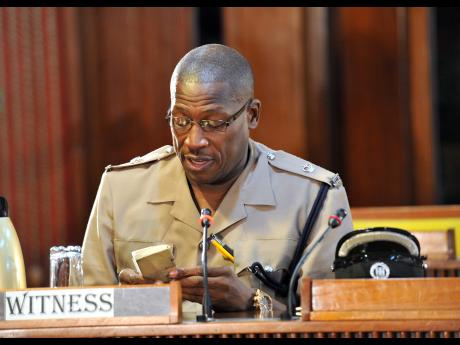 Norman Grindley photo
Superintendent Beau Rigabie reads from a diary that was reportedly taken from Cedric Murray, more popularly known as 'Doggie', who was killed in a shoot-out with the police in Clarendon on August 12, 2010.

The West Kingston Commission of Enquiry this morning heard what is believed to be the admissions of a slain gangster describing how he and other armed thugs engaged the security forces in several fierce firefights during the May 2010 operations in Tivoli Gardens.

The admissions were contained in a diary taken from Cedric Murray, more popularly known as 'Doggie', after he was killed during a shoot-out with the police in Clarendon on August 12, 2010.

Superintendent Beau Rigabie read sections of the document at this morning’s sitting of the enquiry.

In the diary, Murray, who was the reputed leader of the Stone Crusher Gang, professed his loyalty to drug kingpin Christopher ‘Dudus’ Coke and the Coke family.

He also described how he fired his high-powered rifle until his fingers were tired during the operation.

Sign up for The Gleaner’s morning and evening newsletters.
Superintendent Beau Rigabie reads from a diary taken from gangster Cedric Murray.

Murray recorded that the large contingent of police and military personnel that entered Tivoli Gardens may have been more than he expected.

The decision to hear the contents of the diary came after attorneys for the Office of the Public Defender raised objections that they were nothing more than gossip.

However, attorney for the Jamaica Defence Force, Linton Gordon, disagreed arguing that Murray's writings indicate that he was in Tivoli Gardens.

Commission chairman, Sir David Simmons, then ruled that the documents would be highly relevant to the way his panel is going to write their report.