Lessonsf rom a 95-year-old on marriage and relationship 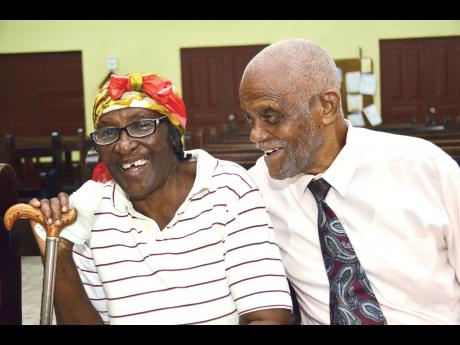 Garfield Angus
James Taylor (right) and his wife Marianne, having an enjoyable moment. The couple has been married for 59 years. 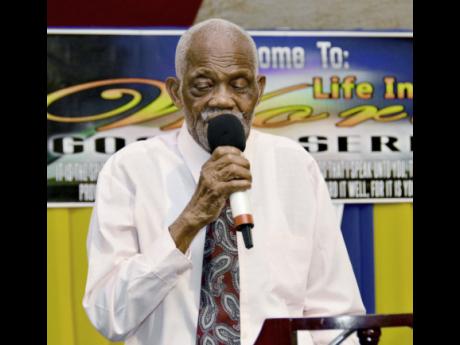 Garfield Angus
James Taylor, at 95 year old, who is a motivator to young people, expert on marriage, and is in his 59th years of matrimony, performs a church duty at an event organized by the Kitson Town Seventh Day Adventist (SDA), Church, in St. Catherine where he served for many years as First Elder. 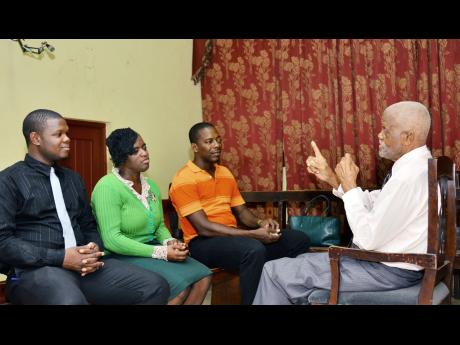 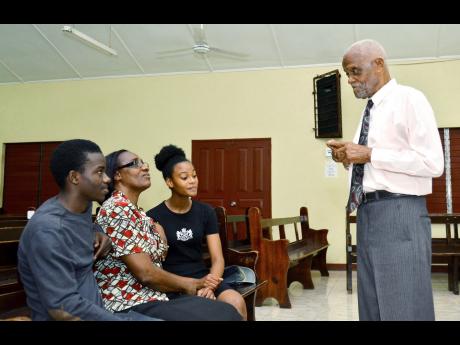 Garfield Angus
Icon of long lasting marriage, James Taylor (foreground), who is in his 59th year of marriage, and hails from the St. Catherine community of Kitson Town, engages with from left: resident of the area, Randy Ranger, Vice Principal of the Kitson Town All Age, Juliett Latibeaudiere, and Grade 10 student at the Spanish Town based Jonathan Grant High School, Marlene Freeman.
1
2
3
4

At 95 years old, and with 59 years of marriage, James Taylor, a testament of long-lasting matrimonial unions, makes time to offer words of wisdom to young people in his community.

The father of three - two sons and a daughter - strongly believes communication and trustworthiness are key to longevity of the marital bond, with husbands providing care to households, without aversion to playing just about any role that is required of them.

"You must help each other. If your wife can't cook good, help her; and you, the man, must behave yourself because she has blood. What hurts you, hurts her," he shared in recent interview, while reflecting on his almost six decades of marriage to Marion.

Brother T, as he is called, said touching is a great ingredient for a wonderful marriage.

"Right throughout the night, I touch my wife," he said.

"Some people believe that sex is what keeps two people together. It is not true. Behaviour, attitudes, respect, and how you treat each other - that is when sex nice," he says, emphasising that when physical abuse and quarrels become a part of relations, companionship is lost.

To avoid mistrust, he said during the times when he was very active, his wife knew of his whereabouts that at all times, whether he was visiting a church or even just conducting business on the road, and Mrs Taylor accorded him the same courtesy.

"When you get a wife that you and her can live for 59 years, and never had a good quarrel, you don't have lips to give the Lord thanks enough," the resident of Penny Piece in St Catherine states.

He says each partner should spend time to learn about the other person, and not leave important issues until the wedding is over, noting that he knew of a marriage which only lasted for two hours as both wife and husband owned homes and after the knot was tied, they could not agree which home they should live in.

Addressing a recent family-life forum in Cherry Gardens, St Catherine, he emphasised that love must be unconditional. To force home the point, he singled out Radcliffe Richards, who, in the face of peril, tried to shield his wife, Wendy Ann Byfield Richards, from gunmen, and were both killed in the neighbouring community of Kingsland.

"The gunmen were saying to Brother Richards, 'Go inside and leave your wife to us.' Brother Richards couldn't do that, so he died with his wife. Love is the foundation. Love. We must practise it. Love without action can't work. Brother Richards loved his wife so much, that he died for her," Taylor told the audience.

In his more than one-hour-long message and reading without the aid of glasses, Brother T also emplored young people to gain useful skills and education before embarking on family engagements.

"Young people, stay in school until you get a good education. Teenage pregnancies, we are tired of it. A child can't raise a child. Get your education, jobs, then you married and live a decent life," he urged.

Taylor was one of the early furniture markers in Kitson Town, St Catherine, where his workshop was one of few places where young males could gain a skill after leaving the Kitson Town All-Age School. He also served for many years as first elder at the Kitson Town Seventh-day Adventist (SDA) Church.

Pastor of the Kitson Town Circuit of SDA Churches, Christopher Mighty, on whose invitation Taylor addressed the event, said after listening to Brother T at a wedding anniversary celebration, he decided to have him share his experience with a wider audience.

"The brother was there, and he gave us a piece of lecture, and I said to myself, 'I have to get this guy to come to the crusade to teach some people about marriage," the pastor explained.

Youth leader Nadine Brown said the presentation reinforced her belief that one must be prepared mentally and spiritually for marriage.

"He speaks things that are happening now, and the young people can learn, and have learned from it."

Northern Caribbean University student Tyrone McKenzie regards the information from Taylor as "valuable", and he is now more aware of the many cautions that he needs to observe "when choosing a partner".

For grade 10 student at the Spanish Town-based Jonathan Grant High School, Marlene Freeman, the presentation was a motivation to stay away from "getting involved too early", as it can cause persons to lose a lot.